by Team VFMI
in CRIME HAS NO GENDER, IMPACT ON CHILDREN, IN THE NEWS, NON TIER-I CITIES
0

Anganwadi Female Teacher Booked For Burning Private Parts Of 3-Year-Old Boy Because He Urinated In His Underpants | CRIME HAS NO GENDER (Image: Social Media)

We need to look at criminals without having any Gender Analysis of who the perpetrator or victim is.

In a shocking incident recently reported from Karnataka, a female Anganwadi daycare centre teacher has been arrested for brutally burning a minor boy’s private parts.

KP Rashmi (accused woman) works as a teacher with the Anganwadi daycare centre in the Tumkur district of Karnataka.

She, along with her assistant burnt a 3-year-old boy’s genitals with matchstick for urinating in his underpants. Police officials informed media that the horrific crime took place on Monday and the FIR was filed on Friday.

The Anganwadi has been booked under Juvenile Justice (Care and Protection of Children) Act 2015 and also under Section 285 IPC.

Elaborating on the reason for this horrendous crime, the cop said,

The child was wetting himself often. To stop it…they burnt him.

Rashmi had earlier tried to issue an apology and resolve the matter to avoid any legal action. However, the parents of the 3-year-old victim insisted on strict actions, and filed an FIR against her on Friday. The Women and Child Welfare Department (WCD) has also issued notice to the teacher, as reported by local media.

In another media report, the female teacher lit a match stick near the child’s scrotum and said that she would not extinguish it, if he didn’t stop wetting his pants. In the pursuit, she ended up injuring the child’s private parts.

As per media reports, the victim has sustained burns on his private parts and thighs, however, the boy is reportedly out of danger.

The incident has shocked and angered the local community. Further probe into the brutal crime is said to be underway. 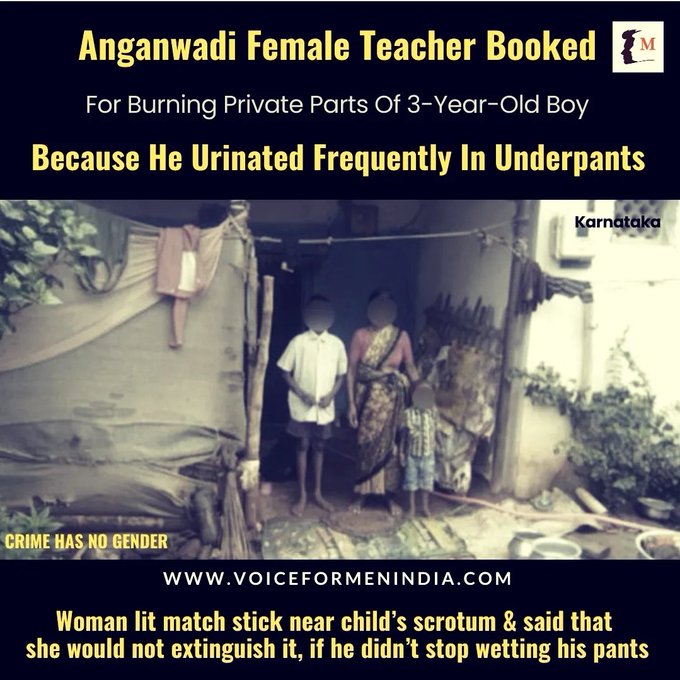 ▪️Woman lit match stick near child’s scrotum & said that she would not extinguish it, if he didn’t stop wetting his pants