Con Brides in Punjab continue to fool their Husbands and in-laws, as government looks the other way with no stringent laws to against such women.

In yet another case reported from the state of Punjab, a married woman made her in-laws fund for her immigration to Australia, and once her motive had been achieved, she disconnected all ties with her husband and in-laws back in India.

Karandeep Kaur got engaged to Ajmer in 2018. During the period between engagement and marriage, it was agreed that Ajmer’s family would fund for Karandeep’s relocation to Australia. It was also decided that Karandeep would later take Ajmer abroad with her on a spouse visa.

In 2020, Karandeep returned to India and got married to Ajmer. The couple stayed together for around a week, before the bride left for Australia alone and disconnected all communication with husband and in-laws.

Sukhjit Kaur, Ajmer’s mother, lodged a complaint with the police accusing her daughter-in-law and her parents of duping her son and their family. In her complaint, Sukhjit said,

On July 1, 2018, Karandeep was sent to Australia, after we spent around Rs 26 lakh to facilitate her relocation. She came to India after two years and then married Ajmer at a gurdwara in Rania. After the wedding, the couple stayed in Budhi Mari for about a week as Karandeep insisted on flying back to Australia and said she would get all the formalities done to call Ajmer there.

Karandeep went to meet her parents before leaving for Australia, but she left the country without informing her husband.

When Ajmer spoke to her, Karandeep said she would not call him as they had planned to cheat us only for our money. When we contacted Karandeep’s family members, even they gave similar reply.

In their preliminary investigation, police have found the allegations to be true. A case has been registered at Ellenabad police station, on the complaint of Sukhjit Kaur.

The complaint has been registered not just against Karandeep, but also her parents Mahinder Singh and Jaswinder Kaur, all from Dhani Balasar village of Rania area of Sirsa district. Police has also booked one Harmel Singh, a resident of Adamke village in Mansa district, in the matter.

▪️Groom's Mother: "We spent around Rs 26 lakh to facilitate her relocation. She left without informing us & cut all ties"@BhagwantMann @CMOPbhttps://t.co/zAcMJFIPEp 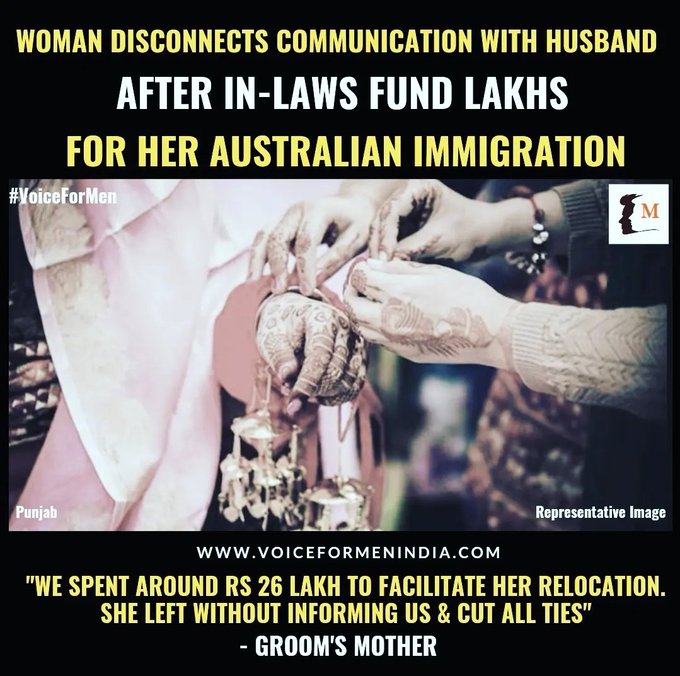 Tags: #CrimeHasNoGender#MenToocrimes by womenIn the Newsspeak up menvoice for men