Adultery in India has been decriminalised, but Divorce is still a taboo and Marriage, even if dead, is considered sacrosanct as per Hindu Marriage Laws. It is almost impossible to get legal freedom despite years and decades of separation.

The Calcutta High Court was hearing a matrimonial case on Friday, where it asked an estranged couple, separated since eight years, to try to bridge their differences. After the estranged couple agreed to the High Court’s suggestion, the court has asked them to spend two days in Eco Park and then inform the court on what they think about their future.

READ ORDER | Wife Has Right To Ventilate Her Grievance By Writing Letter To Husband’s Boss Even When 498A Case Is Subjudice: Calcutta High Court

The couple got married eight years ago. The husband is an engineer by profession and works with the state government, while his wife is an IT professional working in Sector V at Kolkata.

The couple stayed together only for three months, after which the woman left her matrimonial home and shifted back with her parents. However, neither the husband or the wife moved Court in the past seven and a half years seeking divorce.

Around six months ago, which is after living separately for the past seven and half years, the wife lodged a case under the Domestic Violence Act 2005, alleging that some of her ornaments were being held back by her husband. Fearing arrest, the husband moved an anticipatory bail plea in the Calcutta High Court.

Justice Kausik Chanda was hearing the matter and decided to speak with the husband and wife in person. The couple met with the Judge in his High Court chamber.

When the Judge questioned the couple if they were ready to reconcile their differences, the husband expressed his willingness to leave behind the differences, and subsequently, the wife also consented to the same. Justice Chanda then suggested that the couple can spend two days together, post which he will hear their case again.

The High Court, though, had left it on the couple to decide whether they would like to reconcile or battle out a separation in court.

Justice Chanda’s office took the initiative to find a suitable accommodation for the couple to spend time together. The Eco Park in Kolkata was chosen as an option. The couple decided to split the tariffs.

Leave Your Thoughts Below: 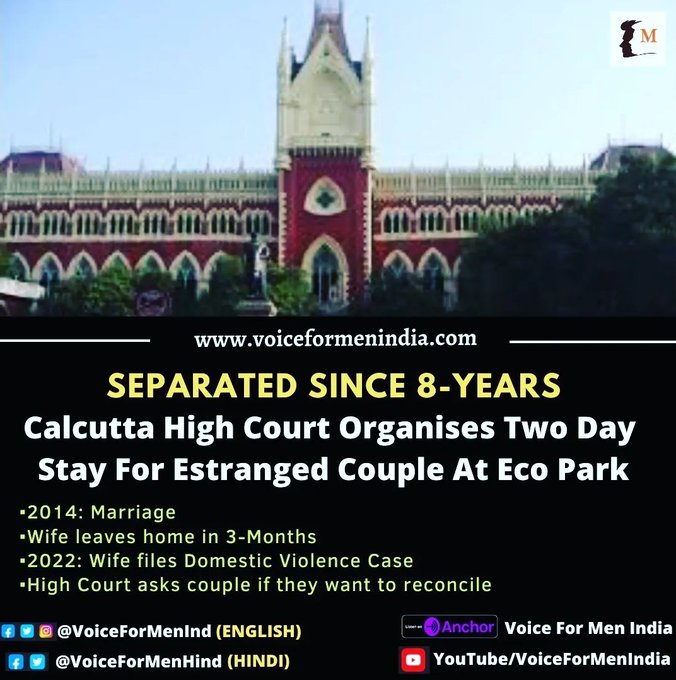