by Team VFMI
in GENDER STORIES, IN THE LAW, IN THE SOCIAL, SUPREME COURT
0

The Union government has defended before the Supreme Court legal provisions on restitution of conjugal rights, saying it was aimed at bringing in cohabitation between estranged parties so that they can live together in the matrimonial home in amity.

Responding to a petition challenging the provisions of RCR (Restitution of Conjugal Rights), the Modi Government said,

The remedy of restitution of conjugal rights, is a positive, useful and practical matrimonial remedy, available to both spouses in equal measure and vigour, which is widely used by estranged couples in an endeavour to find solutions to matrimonial differences and problems, which may not be so grave so as to warrant taking recourse to more serious remedies, that invariably push the already strained marital relationship to a point of no reconciliation.

In simple terms, Restitution of Conjugal Rights is a provision avaiable to either spouse to continue matrimonial relationship, even when the other has filed for divorce. The same can be filed under:

These provisions empower courts to pass a decree of restitution of conjugal rights to an estranged couple.

Pleas have been filed by Ojaswa Pathak and Mayank Gupta, the students of Gujarat National Law University at Gandhinagar, who challenged the validity of section 9 of the Hindu Marriage Act (HMA), Section 22 of the Special Marriage Act (SMA) and certain provisions of the Code of Civil Procedure (CPC). The petitioners are being represented by Senior advocate Indira Jaising.

The plea has referred to the nine-judge verdict that held privacy as one of the fundamental rights and assailed the legal provisions of the HMA and the SMA, saying that they force mostly unwilling women to cohabit with their estranged husbands.

Courts in India have understood ‘Conjugal rights’ to have two key ingredients: cohabitation and sexual intercourse. Under the legal scheme in India, a spouse is entitled to a decree directing his other spouse to cohabit and take part in sexual intercourse. He or she is also entitled to coercive measures in the form of attachment of property in case the spouses wilfully disobey the decree of restitution.

The legal framework is “facially neutral” and places a “disproportionate burden on women”…it is “based on feudal English law which regarded a woman as ‘chattel’ of her husband”.

It is steeped in a patriarchal gender stereotype and is violative of Article 15(1) (prohibition of discrimination on the ground of gender etc) of the Constitution.

The Centre under the leadership of PM Narendra Modi has submitted that the provisions provide for the remedy of restitution of conjugal rights without any discrimination on the basis of gender.

It has been pointed out that provisions of restitution of conjugal rights are available under the personal law of every major religion prevalent in the country. However, the challenge in the present petition has been restricted to the provisions under the Hindu Marriage Act, 1955 and the Special Marriage Act, 1954.

It has been submitted that the statutory mechanism provided in the various enactments for restitution of conjugal rights is aimed at bringing in cohabitation between estranged parties so that they can live together in a matrimonial home.

According to the government, enactments for restitution of conjugal rights allow spouses access to a relatively soft legal remedy by which they can iron out differences arising out of the normal wear and tear of matrimonial life with judicial intervention. Further, they are aimed towards cohabitation and consortium and not merely sexual intercourse.

According to the Centre, the remedy of conjugal rights is gender neutral in the constitution and gender neutral in its operation, and in reality the remedy is availed of by spouses of both sexes and no evidence has been led to establish any discrimination in the operationalisation of the remedy. The Centre further added,

It is submitted that, in fact, the remedy enables both sexes to enforce their marital rights within a reasonable framework and in no way does it create an unequal playing field.

The Centre has submitted that through the enactments under question, the state does not seek to violate the privacy of any individual. It is submitted that the restitution of conjugal is available to either spouse and operate within the framework of marriage, within judicial parameters and interventions without any intervention or role on part of the state. The Centre said,

The remedy of conjugal rights is in sync with the ecosystem of marriage laws and has enough checks and balances to ensure that the same is just, fair and reasonable in order to not fall foul of article 21.

Remedy To Either Spouse Who Has Been Deserted By Other

The Union Government has submitted that section 9 of the Hindu Marriage Act, 1955 and section 22 of the Special Marriage Act, 1954, provide for a remedy to a married male and a female by seeking a decree of restitution of his or her conjugal rights which may be used by a deserted spouse against the other who has withdrawn from the society of his or her spouse without any reasonable excuse.

▪️Plea In SC: "RCR places disproportionate burden on Women. Based on feudal English law which regarded woman as chattel of husband"https://t.co/G9vJY1Nagm 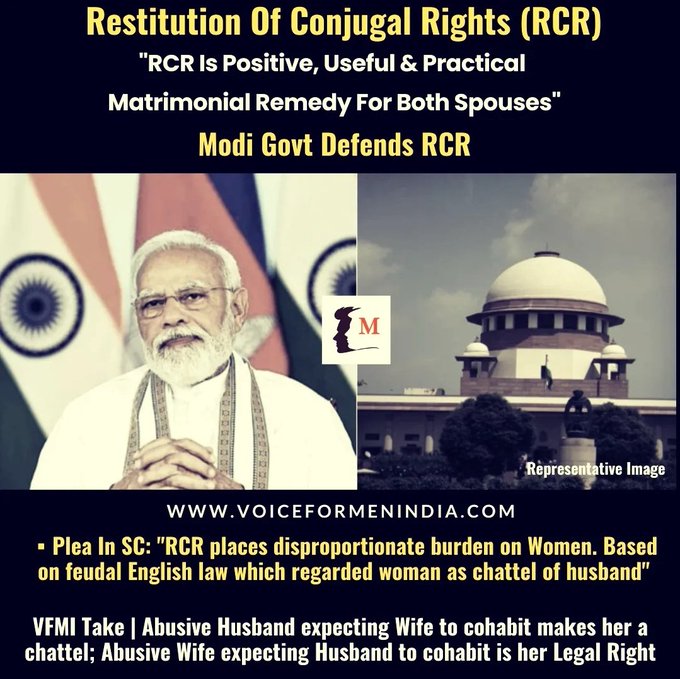