Time and again several courts have insisted on the rule of adopting Shared Parenting, even if couples are battling for divorce.

The Madras High Court in its recent order directed a woman to treat her husband with respect, whenever he visits her home to meet their child. Justice Krishnan Ramasamy even went to the extent of telling the woman to treat her husband with the Indian principle of “Athidi Devo Bhava” [Guest is God] and avoid differences when it comes to maintaining relationship with the children.

The Madras High Court was dealing with a petition submitted by an estranged husband for joint custody and shared parenting of their 10-year-old daughter. The court had permitted the father to meet his child on Fridays and Saturdays between 6 and 8 p.m. The estranged couple lives in one of the upscale projects at Chennai,  however, in two separate towers.

The father had contended that though he had visitation right on every alternate days between 6pm and 8pm, the mother was now planning to take the child to Delhi and settle there. The mother appeared and submitted that she had no such intention and in turn requested a modification to the earlier order to the effect that the father be given visitation rights on Friday and Saturday at the residence of the mother.

Justice Ramaswamy was very particular about the well being of the child and thus noted that poisoning a child’s mind by one parent against the other is child abuse in itself.

According to Justice Ramasamy, children do not naturally feel hatred; rather, it is a taught emotion. Therefore, turning a child’s mind against their other parent will be considered “child abuse.” He added,

Every child has a right to and a need for an unthreatened and loving relationship with both parents.

The Judge even remarked that while a couple may not be required to treat each other with love while they are separated, humanity demands that they be kind in front of their children. He had seen numerous instances of non-cooperation and ill-treatment of a spouse whenever they visited the child in the custody of the other spouse pursuant to court orders.

The Judge directed the respondent/wife to treat her ex-husband with basic respect when he comes home to meet his daughter. The Judge concluded,

The spouse shall treat other spouse, though not as wife/husband due personal indifferences, but at least treat him/her as a guest by paying more attention than wife/husband since in our customs and practice, a guest is treated as “Athidi Devo Bhava (Guest is God)” and show kindness and empathy towards the guest who is none other than the parent of the child and respect him/her in front of the child.

The respondent/wife is directed to show hospitality by providing snacks and dinner etc., and have the same with her child and create a healthy atmosphere so that the child should feel happy and enjoy the moments. 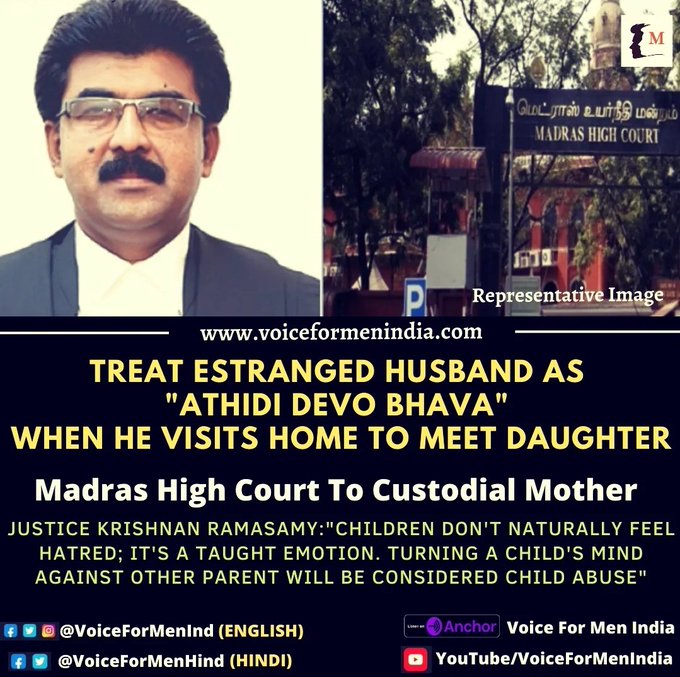