The Madhya Pradesh High Court, Indore Bench in its order dated November 28, 2022 held that proceedings in an application filed under Section 24 of HMA are independent of other proceedings either under Section 9 or 13 of the Act and hence the order passed while deciding the application is final in nature and not interlocutory.

Observing that the husband’s appeal against an order passed while deciding an application for interim maintenance under Section 24 of the Hindu Marriage Act is maintainable under Section 19 of the Family Courts Act, the High Court said,

The evidence for deciding the interim maintenance is separately recorded and can not be taken into consideration while deciding the main petition either filed under Section 9 or 13 of the Hindu Marriage Act.

Therefore, proceedings initiated under Section 24 by filing an application either by the applicant or respondent are independent proceedings and the order passed in it is the final order, hence, the appeal under Section 19 of the Family Courts Act is maintainable…

Parties were married, but due to differences separated in 2008, and are living their independent lives since past 12-years. The husband is working in Gurugram, while the wife has been living in Mumbai since all these years.

The husband initiated a divorce case from his side only now (on grounds of cruelty), post which the wife instantly initiated an application for maintenance under Section 24 HMA.

Estranged wife has been working as a doctor, despite the same, maintenance demanded was Rs 2,00,000 per month.

After viewing facts on record, the family court awarded Rs 40,000 per month to the wife as interim maintenance along with additional Rs 70,000 as litigation expenses.

The husband appealed against this order in the high court.

The Appellant-Husband submitted before the Court that the Respondent-Wife was a highly qualified Doctor and that she had been living in Mumbai for 10-years during their separation without seeking any maintenance money. Therefore, he urged the court to set aside this maintenance order.

The Wife in her submission stated that the impugned order was interlocutory in nature and therefore, no appeal would lie against the same under Section 19 of the Family Courts Act. In fact, the wife went ahead and filed a cross objection, seeking enhancement of the maintenance amount awarded to her through the impugned order.

The Division Bench comprising Justices Vivek Rusia and Amar Nath Kesharwani dealt with the objection with regards to the maintainability of the appeal.

In its view, the Court opined that the final outcome of the proceedings in application filed under Section 24 of HMA have no bearing on any other proceedings being pursued by the parties involved. The High Court remarked,

So far as the provision of Section 24 of the Hindu Marriage Act is concerned, the husband or wife, as the case may be, can seek interim maintenance and litigation expenses during the pendency of the divorce petition. On the basis of evidence and material available on record, the Court may direct the opposite party to pay interim maintenance during the pendency of the proceedings.

The amount payable by way of interim maintenance and litigation expenses is neither returnable nor recoverable after the conclusion of the main proceedings. Even said amount is not liable to be adjusted in the amount payable as permanent alimony. Even if the divorce petition is dismissed or allowed, the order passed under Section 24 of the Hindu Marriage Act shall not be merged into the final order.

Thus, the Court held that the order deciding an application moved under Section 24 of HMA is final in nature and therefore, an appeal against the same would be maintainable under Section 19 of the Family Courts Act. Accordingly, the objection raised by the Respondent was overruled.

The Court further examined the merits of the case where it noted that the couple had been separated since 12-years, and the maintenance was sought by the wife, only when the husband filed for divorce.

The Court rejected the submission put forth by the wife that she was earning only Rs 7,000 per month despite her qualifications. The Court remarked,

The appellant and respondent are living separately since 2008. The appellant is residing in Gurugram and the respondent resides in Mumbai. She is maintaining herself for the last 12-years and never claimed any maintenance. She is a highly qualified doctor. She used to travel from Mumbai to Indore by flight as per her declaration.

She travelled at least four times a year by flight, therefore, it cannot be said that she is surviving only on an income of Rs.7,000/- per month despite having such high qualifications which is much less than the minimum wage payable to a Class–IV labour. 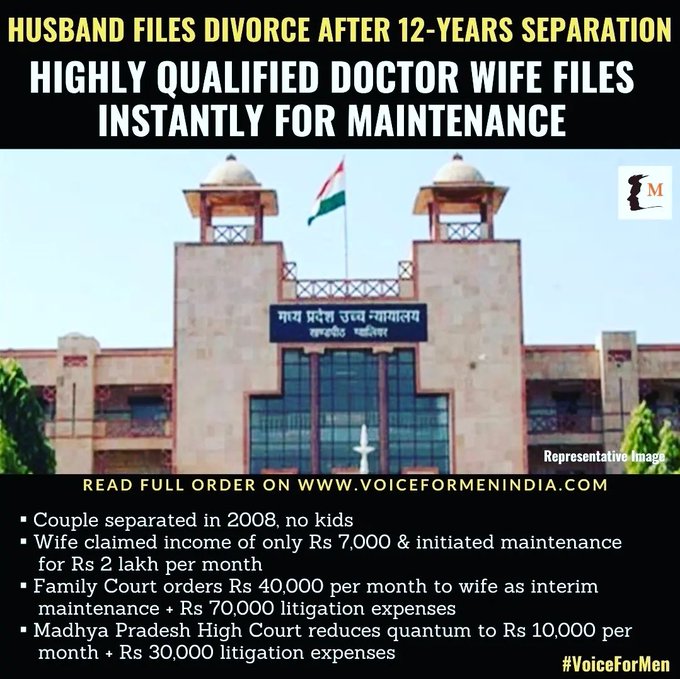