The Karnataka High Court in its order dated September 19, 2022 quashed a case u/s 498A IPC (dowry harassment) remarking that the charge sheet was filed on the basis of omnibus and general allegations without any substance.

Parties got married in October 2009 in accordance with islamic customs and traditions. Thereafter, the couple resided at the marital home along with husband’s family.

In June 2011, a son was born to the couple, and in December 2011, the couple left with their child for USA. In 2016, the family returned to India and during their stay, wife accused her husband and his family of harassing her for dowry.

In February 2017, wife returned to USA along with the son, however, in May 2018, she was forcibly sent back to India.

When she wanted to re-enter her in-laws’ home, she was not allowed entry this time. Subsequently, the wife filed cases under Section 498-A read with Section 34 of IPC and Sections 3 and 4 of the Dowry Prohibition Act, 1961 against her husband and his family.

Learned Magistrate after taking cognizance of the aforesaid offences issued summons. Taking exception of the same, this petition is filed.

Learned counsel appearing for the wife submits that the order granting divorce by the Court of USA is obtained fraudulently without issuing notice to her and the same has no binding. The charge sheet material clearly discloses commission of the offences alleged against the accused and the same does not warrant any interference.

At the outset, the bench of Justice Hemant Chandangoudar addressed the divorce decree obtained from USA. The bench noted,

READ JUDGEMENT | Mere Demand For Separate House By Wife Not ‘Cruelty’: Karnataka HC Sets Aside Divorce Decree Despite Couple Being Separated Since 15YRS

With regards to allegations of dowry harassment made by the wife against her husband and in-laws, the high court remarked,

The dispute between the parties arises out of martial discord, however, given a criminal texture so as to pressurize the petitioners/accused to arrive at settlement.

Allowing the petition by the husband, the Karnataka High Court said,

The allegation against accused Nos. 2 to 4 subjecting respondent No.2 to cruelty was during her alleged stay in India in 2017. Respondent No.2 returned to India on 10.02.2018 and the FIR was lodged on 30.05.2018 without offering any explanation.

Hence, it is implied that the FIR was lodged against accused Nos.2 to 4 with an ulterior  motive to wreak vengeance and with revengeful intent. 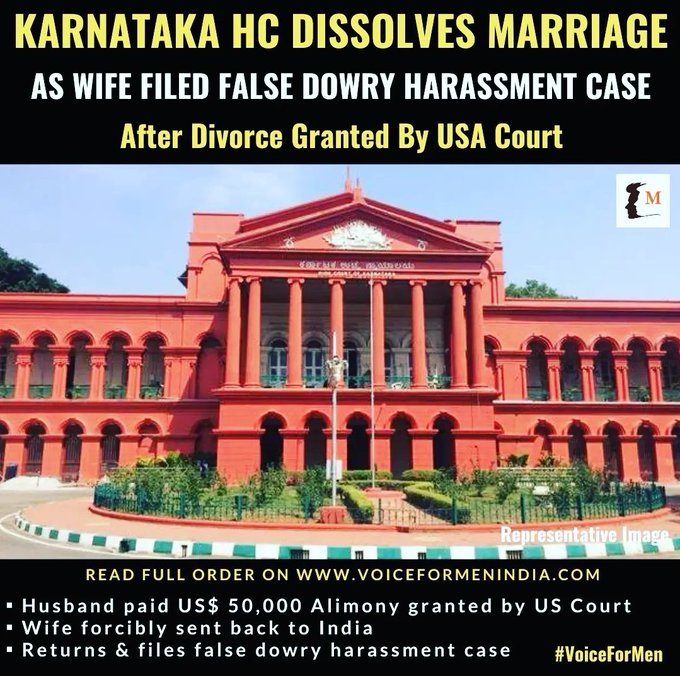