Citizen of India Requests CJI To Reconsider Formation Of Bench In Marital Rape PIL; 2 Out Of 3 Judges’ Opinion Already In Public Domain

Marital Rape PIL hearing was listed at the Supreme Court today, where the top court has sought Centre’s response on a batch of petitions related to criminalisation of the same.

The bench for the matter was led by:

The bench has instructed the Union government to file its response on the issue by February 15 and subsequently, the final hearing on the pleas would commence from March 21 this year.

Amidst this development, a concerned citizen of India, who chooses to remain anonymous, has written a letter to honourable Chief Justice of India, requesting him to reconsider the formation of the bench in the said matter. According to this citizen, 2 out of 3 judges on the bench have already publicly expressed their opinion in favour of criminalisation of marital rape, and thus, the outcome may not be balanced with respect to arguments from all sides.

The letter reads as follows:

I write to you as citizen of India who is quite interested in outcome of various appeals filed in The Hon’ble Supreme Court, hereinafter referred as Hon’ble SC, against the split verdict of Hon’ble The High Court of Delhi, hereinafter referred as Hon’ble HC, pertaining to Exception 2 to Section 375 of IPC being ultra vires to Article 14,15,19 and 21 of Constitution, in short called Martial Rape matter. Through credible news portals and reading through orders passed by Hon’ble SC in various appeals in Marital Rape matter I came to know that it is to be listed in the month of January’23. The Cause List of January 16, 2023 is out and a cursory glance at it shows that Marital Rape matter is listed on the same day. It also reveals that Marital Rape matter would be taken up by a bench led by Hon’ble The Chief Justice of India along with Hon’ble Mr. Justice PamidiGhantam Sri NaraSimha and Hon’ble Mr. Justice J.B. Pardiwala.

I, who have been following the matter for years now since the days when matter was first heard in Hon’ble HC, couldn’t help but notice that two of the Hon’ble Judges in the designated bench of the Hon’ble SC have already been vocal through their judgements that they believe Exception 2 to Section 375 of IPC is legal fiction and thereby indicating it must go.

To buttress my claim, I would like to draw your kind attention to the judgement in the matter, Nimeshbhai Bharatbhai Desai vs State Of Gujarat on April 2, 2018, R/CR.MA/26957/2017, delivered by Hon’ble Justice Pardiwala during his tenure as judge of Hon’ble Gujarat High Court. A bare perusal of the judgement would confirm that he firmly believes Exception 2 to Section 375 of IPC must go and doesn’t deserve a place in statute.

Further, Hon’ble CJI himself recently while writing for the bench to which even Hon’ble Justice Pardiwala was part of in the matter, X vs The Principal Secretary, Health and Family Welfare Department, Govt. of NCT of Delhi & Anr on September 29, 2022, Civil Appeal No 5802 of 2022, stated as follows:

It is clear from above that while calling Exception 2 to Section 375 of IPC legal fiction it was acknowledged by Hon’ble CJI in above mentioned judgement that matter on constitutionality of exception is pending before a different bench to which neither Hon’ble CJI was part of nor Hon’ble Justice Pardriwala at that point of time.

Given that stands of both Hon’ble CJI and Hon’ble Justice Pardiwala pertaining to Exception 2 to Section 375 of IPC is in public domain, sudden change in bench puts an extra burden on parties opposing the removal of exception as they may have to first bring the majority (bench of three (3) judges) in the bench to the point of neutrality which inherently gives an advantage to parties advocating removal of exception over parties opposing it.

In the end, I would state that justice should not just be done but it must be seen to have been done. Someone who is only interested that matters must be decided in fair manner, irrespective in whose favor outcome would be, I would like to impress upon that in the interest of justice and to be fair to all parties especially to those in favor of Exception 2 to IPC 375, Hon’ble CJI should reconsider formation of bench and possibly matter should be listed in front of bench with no history of any opinion through public speaking or judgements in the Martial Rape matter to be adjudicated.

2) December 2021: Marital Rape ought to be a crime: Justice Pardiwala of Gujarat HC [Read Judgment]

It must be noted that Delhi High Court had appointed Senior Advocate Rebecca John as Amicus Curiae in final stages of Marital Rape PIL in January 2021. John’s strong opinions in favour of criminalisation of marital rape are also in public domain. Read below.

What is the Marital Rape PIL about?

Section 375 IPC defines rape and lists seven notions of consent which, if vitiated, would constitute the offence of rape by a man. However, the provision contains a crucial exemption: “Sexual intercourse or sexual acts by a man with his own wife, the wife not being under eighteen years of age, is not rape.”

A batch of petitioners have challenged the constitutional validity of this exception under Section 375 of the IPC.

In May last year, a division bench of the Delhi High Court delivered a split verdict in the said matter:

Raped By Our Wives Without Consent; Why Is Marital Rape Debate Not Gender Neutral?

▪️"Matter should be listed in front of bench with no history of any opinion through public speaking or judgements"https://t.co/cVcckdVVZh 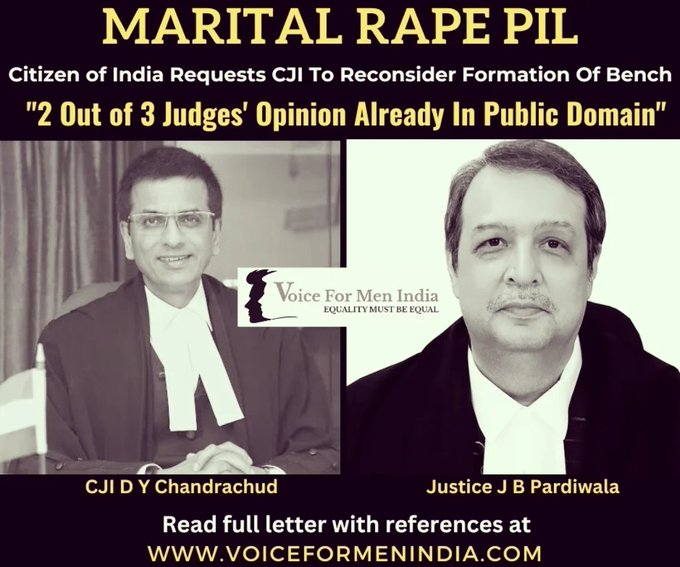