by Team VFMI
in IMPACT ON CHILDREN, IN THE LAW, IN THE NEWS, SUPREME COURT
0

Divorces and separation must be encouraged if a couple has differences beyond repair. However, in 2022, it is only prudent that the parents together decide what is in the best interest of their child, instead of quarrelling and fighting meaningless ego battles for years.

The situation surely becomes trickier, when the estranged parents live in two different cities, and kind of challenging when they live in two separate countries. However, the law of the land is quite clear when it comes to child custody cases of children who have lived abroad, but brought back to India by either parent after separation (often without the knowledge of NRI Father/NRI Mother).

In its recent order, the Supreme Court directed a woman to hand over the custody of an 11-year old boy, a naturalised American citizen, to her NRI husband.

Remarking on the case, the apex court expressed that the custody battle for a child between estranged parents must be decided on the basis of what is in the best interest of the child which may be different from who the child wishes to live with.

The child was born and brought up in the US where the NRI couple was living. However, after the relationship soured between the couple, the mother brought the child to India without informing her husband.

The father then approached the court to take custody of the child.

The man had first moved the Karnataka high court, which turned down his plea after noting that the child wished to live with her mother in Bengaluru and was comfortable in India despite living abroad for more than a decade.

Advocate Prabhjit Jauhar who represented the husband informed top court that merely because the child was brought to India by the mother and was admitted in a school and that he is now feeling comfortable with schooling and stay in Bengaluru, could not have been taken as factors for considering the welfare of the boy who lived nearly for a decade in the US.

Adjudicating the dispute, the apex court said that it was in the best interest of the child to return back to the US as he is a naturalised American citizen and being brought up in the social and cultural milieu of that country he is accustomed to the lifestyle, language, customs, rules and regulations of his native country. A bench of Justices A M Khanwilkar and C T Ravikumar said,

Certainly, the wish/desire of the child can be ascertained through interaction but then, the question as to ‘what would be in the best interest of the child’ is a matter to be decided by the court taking into account all the relevant circumstances.

The Supreme Court, while setting aside the High Court order, also noted,

The very fact that he is a naturalised citizen of the US with an American passport and on that account he might, in all probability, have good avenues and prospects in the country where he is a citizen. This crucial aspect has not been appreciated at all.

In our view, taking into account the entire facts and circumstances and the environment in which the child had been born and was brought up for about a decade coupled with the fact that he is a naturalised American citizen, his return to America would be in his best interest.

The court directed the mother to ensure that the child returns to the US forthwith and asked the husband to make all arrangements for her and her parents if they decide to stay there.

Supreme Court Directs Mother To Hand Over US Born Child To NRI Father, After She Unilaterally Returned To India With Minor Son 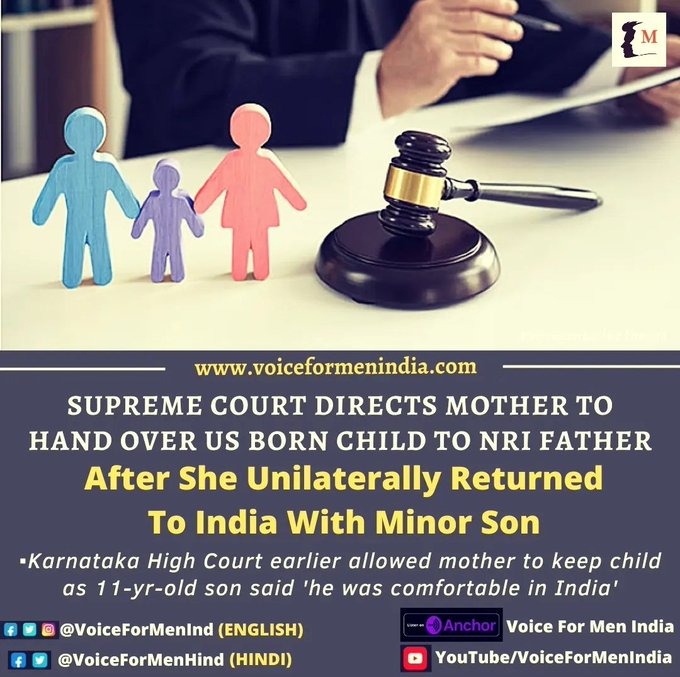