by Team VFMI
in GENDER STORIES, IN THE SOCIAL
0

Several Bollywood celebrities have been speaking out to extend their support to students of Delhi’s Jamia Millia Islamia University. However, renowned actor Ranvir Shorey, who was famous for his comic roles in several movies such as Khosla Ka Ghosla, Pyaar Ke Side Effects and others, spoke against the protests. This triggered backlash on Twitter.

While many online users ridiculed him for his opinion, Artist and #MeTooIndia flag bearer Priyanka Paul called him out and wrote,

Wah. Here’s my #metoo story. Imagine how a guy would be treated if he uses this kind of language to a girl for her views.

Expectedly, Ranvir had to face a series of online reactions since he touched the right nerve of questioning the respect for #MenToo.

Wow. You just reduced the entire Me Too movement to mockery.

Does this look like a joke to you? Randomly putting up a tweet and terming it metoo? Look at the kind of responses it has garnered her. LOOK! Do you see @artwhoring responding in such a way? This is downright disgusting.

This is your #metoo story? Really? Women spoke of systemic violence, rape included, trying to move authorities to make their surroundings safer. Way to go Ravir, reducing their trauma to mockery. All of us who were involved in platforming survivors for a year hope you delete this

This is not the first time Paul has used derogatory language publicly for men or anyone in general. The point Shorey aptly made, is what if he used similar words for Paul or any other woman? Would he be spared from being called out names such as misogynist, sexist, woman abuser amongst others? Why should women pass off as progressive when the name and shame Men publicly but the same is so uncool and disrespectful if a man opts to do so! 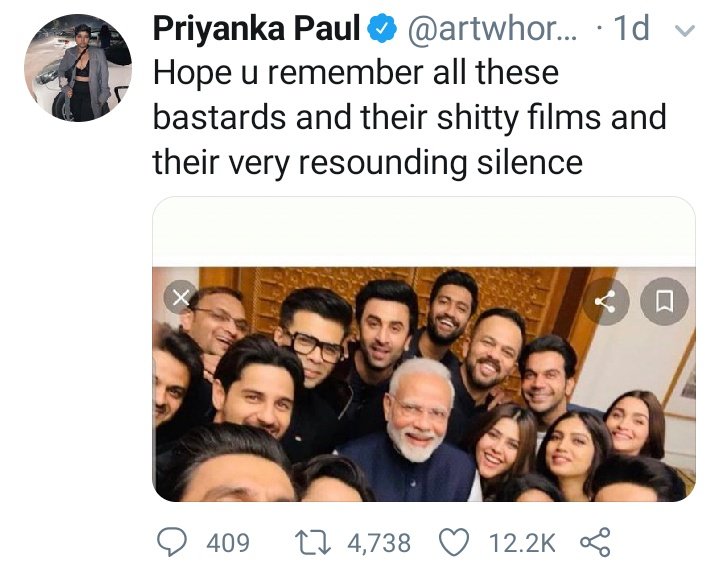 Ranvir had been married to Konkana Sen Sharma, daughter of Aparna Sen. The couple started dating in 2007 and subsequently got married in 2010 in a private ceremony. However, Shorey and Sen divorced in 2017. Together they have a son, Haroon, who is six years old.

Time has come when more and more Men are going to question this Gender bias, which many women feel as their birthright to abuse the other gender.