Any demand by groom or his family is termed as Dowry, but Papa Ki Pari Brides get away with obnoxious demands in the name of empowerment!

In a recent story reported from Uttarakhand, a girl from Haldwani refused to marry her fiancé…because she did not get a ‘mehanga-lehenga’ (costly wedding attire).

According to local reports, a girl from Rajpura area of Haldwani was engaged in June this year to a man, working as a medical professional in Ranikhet. Their wedding was scheduled for November 05, for which cards were printed and distributed.

All the preparations for the wedding were complete for the big day. However, when the girl saw the lehenga brought by the groom, she lost her cool and refused to marry the boy. The groom’s father reportedly went to the extent of giving the girl his ATM card to buy a lehenga of her choice. That too went in vain. Finally, the matter reached the police. But it remained unresolved, reported The New Indian Express.

The would-be bride threw a fit after she learnt that the lehenga purchased by the groom’s side costed only Rs 10,000.

The woman was upset because the groom’s side had informed her that they had ordered a lehenga exclusively from Lucknow.

Soon after heated arguments between the families, the matter reached Kotwali police, where a compromise was reached between the two. Fortunately, the marriage was called off from both sides, before tying the knot and heading for disaster.

Despite efforts by local police, families said….”It was over”….After arguments in the presence of two senior police officers, both sides reached an agreement that it was better to go separate ways.

"Lehenga Very Sasta…Its All Over": Uttarakhand Bride Calls Off Wedding As Groom's Family Did Not Purchase Expensive Wedding Attire

▪️Bride threw fit bcos lehenga costed only Rs 10K
▪️Groom's father gave his ATM card asking her to buy as per her choicehttps://t.co/1vvjAn99D9 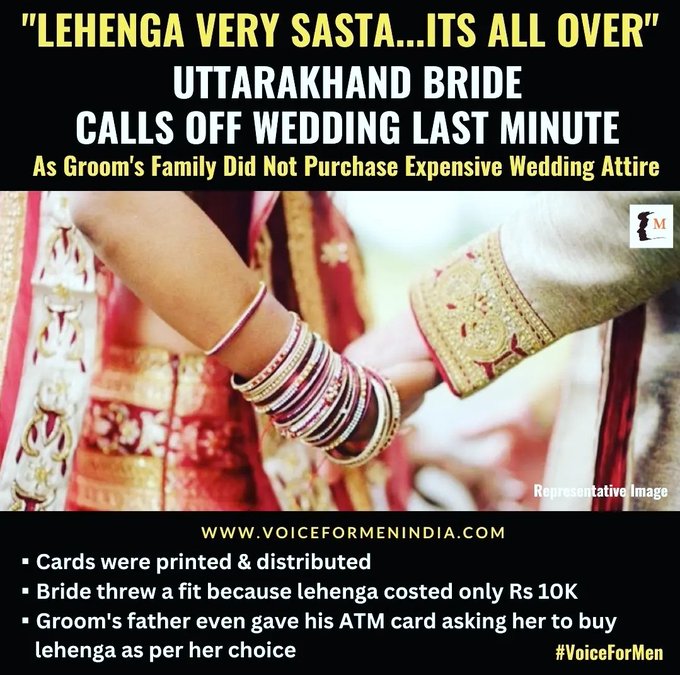