Karnataka Woman Threatens Son Of Industrialist In False Rape Case If He Did Not Pay Up Rs 4 Crore; Arrested

by Team VFMI
in ALLEGED FALSE RAPE, CRIME HAS NO GENDER, IN THE NEWS
0

Karnataka Woman Threatens Son Of Industrialist In False Rape Case If He Did Not Pay Up Rs 4 Crore; Arrested (Image: Daijaworld)

You will constantly hear and read how numbers of rape cases filed in India are ever increasing. But always remember these are cases ‘filed’ and need not necessarily be true everytime. (Disclaimer: That does not dilute seriousness of such heinous crimes in anyway).

Once again, a woman has been nabbed by police for blackmailing an industrialist’s son in a false rape case.

Pushpa, a middle aged woman, met Suraj (son of an industrialist) multiple times and then introduced him to Santosh, who she claimed was the personal secretary of an IAS officer.

When Suraj was talking to Pushpa one day, the other accused barged inside the room and told him that he will be released only after the payment of Rs 4 crore.

Suraj was taken to Pushpa’s residence and she threatened that if he does not give money she would lodge a rape case against him.

Suraj paid Rs 25 lakh to the accused and was released. Pushpa also threatened that if he revealed anything about her, she would get his whole family killed.

However, Suraj approached the police after being released.

Karnataka police on Wednesday arrested Pushpa and three of her associates – Ayyappa aka Arjun, Rakesh and Santosh – on charges of threatening Suraj and trying to extort Rs 4 crore from him.

The gang led by the woman had trapped Suraj by assuring that she would get a government tender for him, the police said.
https://twitter.com/voiceformenind/status/1562733467443789826?s=20&t=q4o8SSIv9IZGVdLIjEJrVA 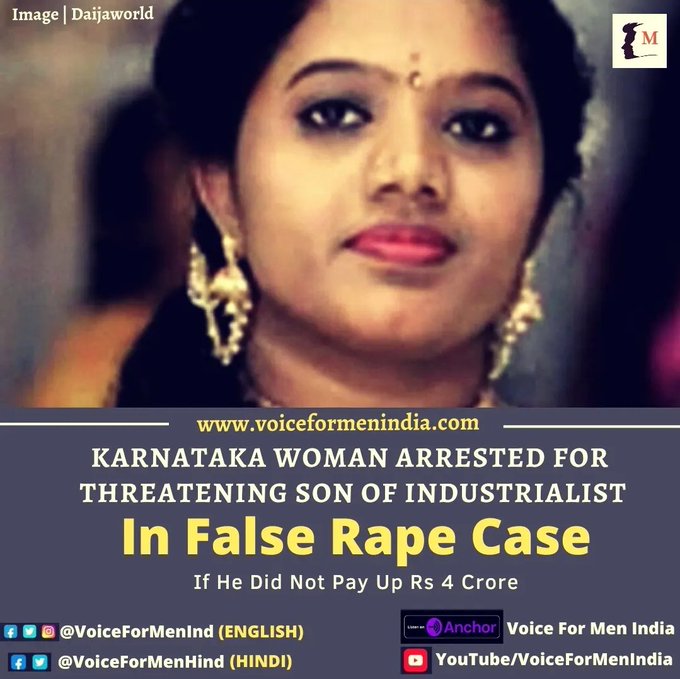 September 2020 Bengaluru | When bankers visited customer’s home for payment recovery, woman in the house threatens them with #FalseRape case

September 2020 Bengaluru | When bankers visited customer's home for payment recovery, woman in the house threatens them with #FalseRape case