“I Don’t Want To Play Any Cards…But Unfortunately, A Man Is Always Blamed” | Aamir Ali On Not Allowed To Meet Daughter After Divorce

by Team VFMI
in HIS STORY, IMPACT ON CHILDREN, IN THE NEWS, SPEAK UP MEN
0

"I Don’t Want To Play Any Cards...But Unfortunately, A Man Is Always Blamed" | Aamir Ali On Not Allowed To Meet Daughter After Divorce (Representation Image)

Bollywood and TV Industry continues to see a spate of divorces. While some couples choose to remain mum and issue joint statements, some go all out levelling allegations against the other.

Aamir Ali and Sanjeeda Shaikh were one of the most talked about couples in the TV Entertainment fraternity, who got divorced this January after being married for nine years. The couple has a daughter, who they had welcomed through surrogacy.

While in this case, both the exes have always maintained silence on the reason for their separation, Aamir recently spoke about his divorce with Sanjeeda and the struggles of staying away from his daughter. In an exclusive interview with ETimes, Aamir shared,

It was extremely difficult at that point. After my marriage fell apart, main hil chuka tha (I was shaken). But I am a sportsman by nature, and I never give up. I have always been a happy soul, and I am glad that I am back to being that.

I don’t harbour ill feelings for anyone and I wish the best for my ex. Sab khush raho life mein

(Everyone should just be happy).

According to him, the COVID-19 pandemic gave him ample time for introspection. It helped the actor gain perspective by allowing himself to look at the positives. He said,

During the pandemic, I got a lot of time to introspect. I started looking at the positives, be it from COVID-19 or my failed relationship.

Nisha Is Living In My House With Another Married Man Since 11-Months: Karan Mehra Accuses Estranged Wife Of Adultery

Not Allowed to Meet Daughter

Recently, there was news in the media how Aamir is not being allowed to meet with his daughter, since the past 10-months. To this, Aamir reacted,

It’s a sensitive topic and I don’t wish to talk about it. I don’t want to play any cards, but unfortunately, a man is always blamed. I have always maintained a dignified silence on matters related to my personal life.

Someone I have spent so many years with deserves respect. So, I won’t say anything.

The couple got married in 2012 and filed for legal separation in the second half of 2020. They were granted divorce a year later in 2021 and the custody of their child was given to mother Sanjeeda Shaikh.

Leave Your Thoughts Below: 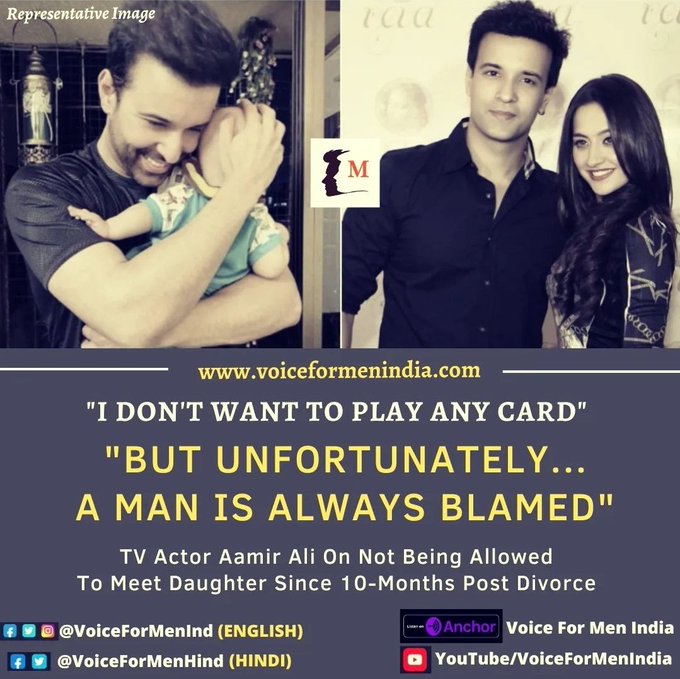