by Team VFMI
in HIS STORY
1

How many of us who are fortunate enough to live a good life contribute back to society? When we say fortunate, it does not necessarily mean only in terms of money, but also in terms of a healthy life and a knowledgeable mind.

Meet this man from Delhi, who has been running a makeshift school for more than 300 underprivileged children beneath a metro bridge in the Yamuna Bank area for the last over eight years, without any assistance neither from the government nor any NGOs. He calls his project, ‘The Free School Under The Bridge’. 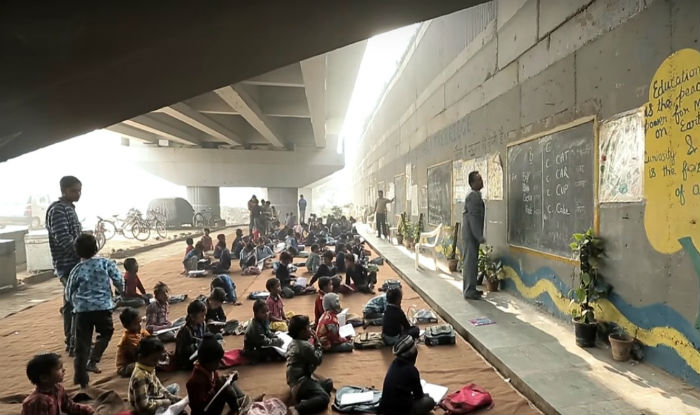 Such occasions make them feel that they are also the part of the society no matter where they live or what background they belong to.

Sharma is driven by his selfless goal of educating these poor and underprivileged children whose smile is more than enough for him. With regards to assistance from various groups and NGOs, Sharma told Hindustan Times, Initially some NGOs contacted me and tried to be associated with the makeshift school but I never allowed them as they all looked suspicious. None of them were serious about the children’s education and their future.

All they were interested in was making money by showing something and claiming something else. I did not approve of their way of functioning which had many loopholes and room for discrepancies.

What Lies Ahead After Schooling

They come to my school fighting hunger, extreme poverty, adverse weather and sometimes resistance from their families. They all dream big. You can see the smile on their face while they study here.

Six-year-old Sunita considers learning in this school as fun and she tries to be regular as much as possible. She says,

I want to achieve big in my life and that is why I come here every afternoon. Sometimes the school is closed due to bad weather like heavy rain or thunderstorm but my passion for studies never gets weakened.

Another student Suresh says teachers here are very supportive and encouraging and work very hard for every one. He quotes,

I never knew the value of education before coming here. Now I dream of becoming a successful and responsible person and want to support my family after the completion of my education.

There are several individuals in society who are doing their little bit by giving back to humanity. Imparting one’s knowledge and educating children not just helps in the growth of the child and the family, but enhances the society as a whole, making it a progressive and loving place to live in.