by Team VFMI
in CRIME HAS NO GENDER, DOMESTIC VIOLENCE, IN THE NEWS
0

What is the first visual that comes to your mind when you hear the word Domestic Violence? Husband beating Wife, Mother-in-Law burning Daughter-in-Law, Entire family bashing a Daughter-in-Law? Unfortunately, feminists have brainwashed the society that a daughter-in-law is the only victim of such domestic abuse, while all others are the perpetrators.

Thanks to the power of social media, we are able to publish other ground realities suffered by Married Men and their old parents, equally at the hands of Daughter-in-Laws.

Here’s a Case from Thane

A 32-year-old daughter-in-law allegedly bit her 60-year-old mother-in-law on the night of September 5, after a petty fight over increasing the television volume.

The Shivaji Nagar police station in Ambernath has registered a case against the daughter-in-law but no arrest has been made yet, informed the police officer.

As per a report by Free Press Journal, the incident took place in the Vadvali area of Ambernath (East).

We have received a complaint from a 60-year-old woman from Shivaji Nagar in the Ambernath area that she was bitten on her three fingers of her right hand by her daughter-in-law (32). The accused was watching TV at a loud volume and when asked by the victim to reduce it, she started an argument by saying that she would not reduce the volume as it is her home and she will do whatever she wants to do.

As the case between mother-in-law and daughter-in-law has been going on in the court for the last few years, it seems to be a family dispute matter. We haven’t arrested the daughter-in-law yet.

The fight has been going on in the family for a long time, and the matter of divorce between husband and wife is going on in court. The accused has done three marriages while the husband has done two marriages, and whenever the daughter-in-law comes to her mother-in-law’s house, there is a fight over some or other petty issues.

Leave your thoughts on this case below: 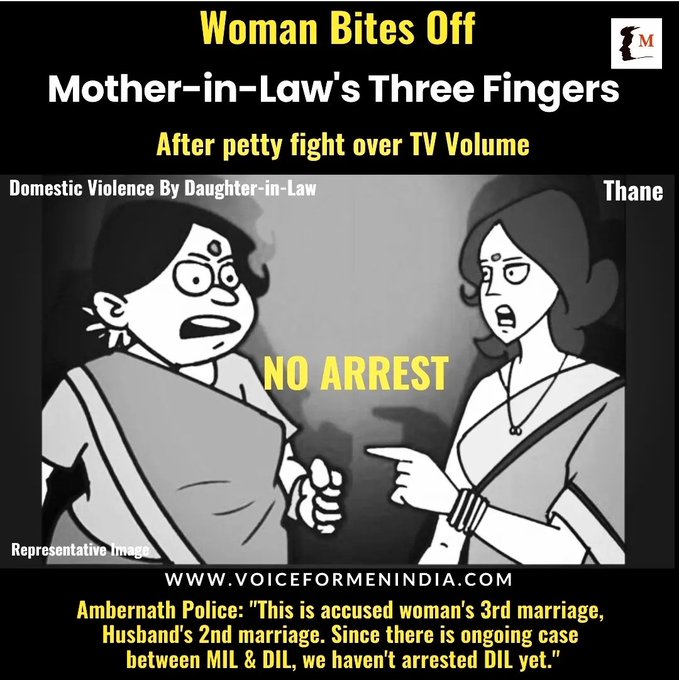