Suicides of Married Men is a serious problem in India. This number is 2.6 times of suicides committed by married women. However, unfortunately, no government seems interested in tackling this problem, because appeasing women at the cost of men and their lives, seems to be the mantra in old…as well as new India.

Yet another #HusbandSuicide has been reported, this time from Delhi.

A head constable of Delhi Police’s Crime Branch died by suicide at Shakarpur Police Colony on Friday. The victim has been identified as Narendra, who reportedly killed himself inside his Wagon-R car.

Narendra shot himself using his service pistol and initial investigation suggests that he was troubled by family issues, reported NDTV.

According to the police, Narendra had arrived at the Shakarpur Crime Branch office at around 11:30 am on Friday. Narendra, who joined Delhi Police 12-years-ago in 2010, took the pistol which he used to kill himself from the Crime Branch office.

Speaking with India TV, Deputy Commissioner of Police (east) Priyanka Kashyap said around 12:45 pm, the city police’s crime branch staff inside the Laxmi Nagar police station premises noticed that head constable Narender had shot himself in his car parked in the parking area of the Laxmi Nagar police colony.

Police has sent the body for post-mortem and an investigation has been initiated into the matter. 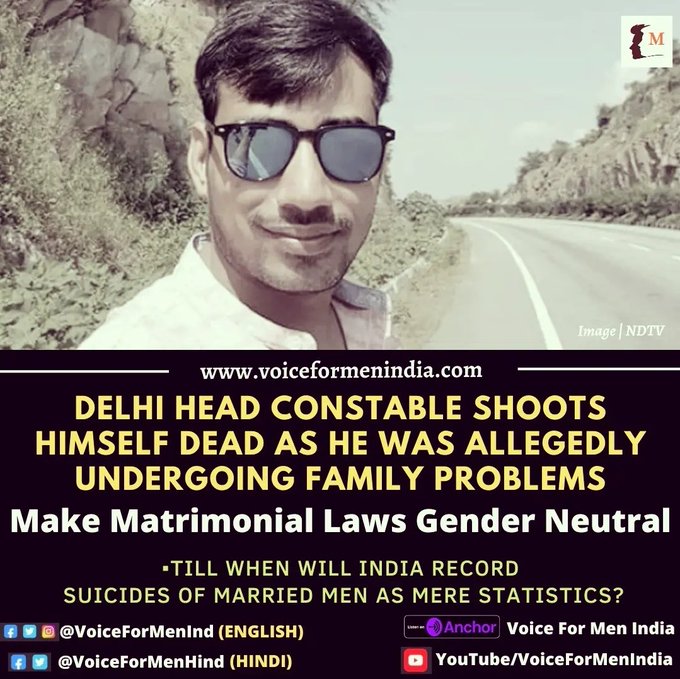 Gender Biased Media Is Not Interested In Husband Suicide Stories