The Punjab and Haryana high court in its recent order said that the statement of a woman who alleges rape must be given pre-dominant consideration, however, nobody in the civilised society can be falsely implicated or convicted just because of that.

According to the complainant woman, she met the accused on August 9, 2017, and got engaged to him with the permission of her family. The accused, who is working for the Indian Army, allegedly took her on his bike to Kosli, Dauroli Road, near BKD School where he performed obscene acts.

The woman had refused to have physical relationship with the accused man prior to marriage. However, she alleged that the man got offended and threatened to kill her. The alleged sexual assault had taken place after the engagement of the complainant and the accused was fixed.

Subsequently, in September 2017, she filed an FIR for rape, molestation and related charges at Rewari’s Kosli police station.

Later, the accused man was arrested and tried for sexual assault.

During the trial, the allegations levelled by the complainant could not be substantiated and the accused man was acquitted. The additional sessions judge had acquitted the accused on the ground that the prosecution failed to prove his guilt beyond reasonable doubt.

Aggrieved by the orders, the complainant challenged the Rewari additional sessions judge’s order dated May 1, 2019.

The statement of the prosecutrix cannot be treated as gospel truth and the court has to see that she is a witness of sterling quality.

If the statement is held to be gospel truth and the courts are bound to hold someone guilty just because there is an allegation by the prosecutrix, it would be a travesty of justice and there would be no need to conduct a trial.

The place of the alleged incident is a public place and next to a hospital, police station and a busy road. It is hard to believe that a person working for the Army would commit an alleged act in a public place and with his fiancée on the day of the engagement after they met for the first time.

Dismissing the woman’s appeal, the bench observed that the findings recorded by the trial court were well reasoned and there was no substance in the allegations of the prosecutrix.

▪️HC: "If courts are bound to hold someone guilty on allegation by prosecutrix, it would be travesty of justice & there would be no need to conduct trial"https://t.co/IMgiqxqmNT 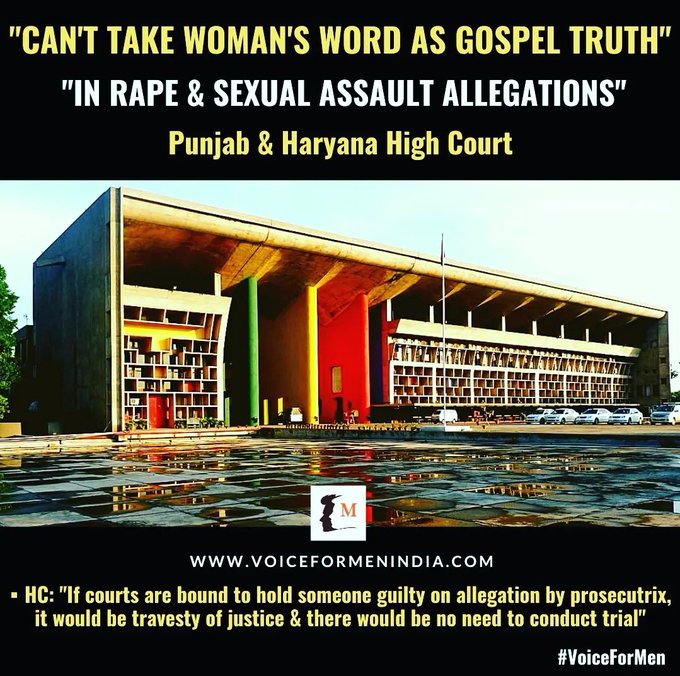