by Team VFMI
in ALLEGED FALSE RAPE, IN THE LAW, IN THE NEWS, SUPREME COURT
0

Can a male partner be charged of rape, if a consensual relationship fails and the marriage does not take place? Time and again different courts have given subjective orders based on individual circumstances in such scenarios. Recently, the top court of India ruled last week,

Where a woman has willingly been staying with a man and had a relationship with him, and if the relationship is not working out now, the same cannot be a ground for lodging an FIR for the offence of committing rape repeatedly on the same woman [Section 376(2)]

Subsequently, the accused man was granted pre-arrest bail after he failed to marry his female partner.

The complainant admitted that she was in a relationship with the appellant for a period of four years. Further, the woman also confessed that she got involved with the man when she was 21-years of age.

The petitioner in this case submitted that he has been falsely implicated in this case with incorrect facts placed on record.

He argued that he and the woman were in a live-in relationship since 2015. He even submitted that the woman infact was married to someone else, and thus, there could not be any false promise of marriage of his (petitioner’s) end.

According to the accused, the complainant has got a government job and thus she lodged the present complaint due to enmity.

On the other hand, the Public Prosecutor as well as the advocate for the complainant argued that she had taken divorce from her husband and was living in with the accused, only because he promised to marry her. The complainant shared that a female child was born out of this relationship.

Thus, she urged the Court to dismiss the anticipatory bail application for the accused so that there could be proper custodial interrogation and a DNA Test.

The Rajasthan High Court in May this year, dismissed the appellant’s anticipatory bail application for the offences under sections 376(2)(n), 377 and 506 IPC. The High Court said,

It is an admitted position that petitioner had made the relation with complainant by promising to marry her and due to their relation, one female child was born. So, looking to the gravity of offence, I do not consider it a fit case to enlarge the petitioners on anticipatory bail.

The bench of Justices Hemant Gupta and Vikram Nath was hearing an appeal against this Rajasthan High Court order. The apex court observed,

The complainant has willingly been staying with the appellant and had the relationship. Therefore, now if the relationship is not working out, the same cannot be a ground for lodging an FIR for the offence under Section 376(2)(n) IPC.

The Supreme Court bench, subsequently, allowed the present appeal and set aside the order of the High Court, ordering that the appellant be released on bail to the satisfaction of the competent authority.

▪️The comments by Supreme Court in this case, strictly pertain to anticipatory bail only, and does not guarantee an acquittal https://t.co/BNYi7ufh0a 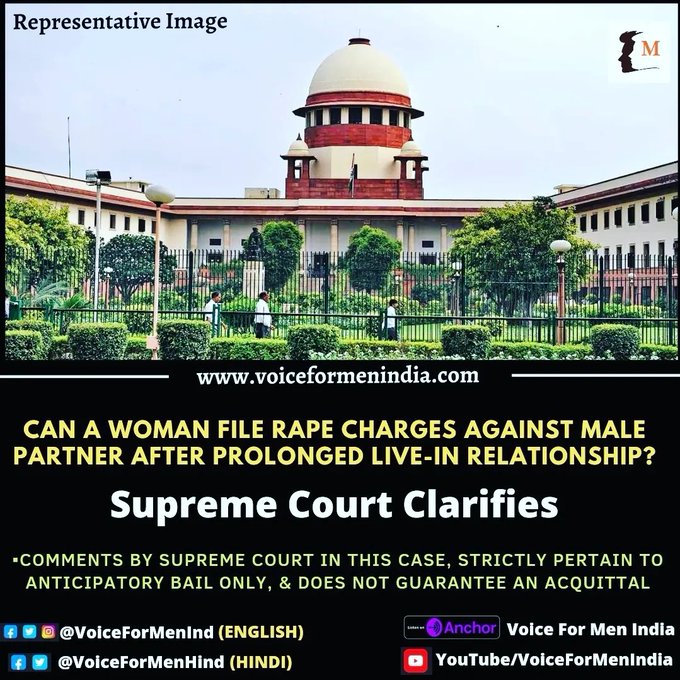