Nothing shocks us anymore when it comes to actions of some women….even young boys are not being spared.

In a bizarre incident, a 9-year-old boy was booked for accidentally causing injuries to an actor’s mother while cycling in the society. The Bombay High Court has now quashed the FIR against the child after several months.

Antriksh Kelkar was only 9-years-old when an FIR was registered against him by the Vanrai police in Goregaon earlier this year. The child, who is a resident of Lodha Fiorenza in Goregaon East, was booked by the police after receiving complaint from actor Simran Sachdeva’s 62-year-old mother in March.

The senior citizen woman accused the boy of accidentally ramming into her with his cycle, while she was on her evening walk in the society compound. The woman complained of undergoing surgery after dislocating her hip bone due to this alleged incident.

After backlash from multiple quarters, including the Child Welfare Committee, the actor claimed she only wanted the cops to take action against the child’s parents.

The high court bench of Justices Revati Mohite Dere and S M Modak noted that the boy was traumatised by the case and directed,

The facts clearly reveal that it was nothing but an accident, which was clearly unintentional. The boy was only 9 years [old]. We are shocked and surprised that the police registered the FIR against a minor boy without having regard to [his] age.

It appears that even before investigation, ‘C’ Summary report was filed by the police. However, much damage was done to the boy by the allegations made against him and the publicity given to the said case.

The Bombay High Court also wanted to understand what action was taken against the ACP who has been accused of forcing the sub-inspector to book the boy.

The high court has ordered the state government to give a compensation of Rs 25,000 to Antriksh Kelkar and his mother Akanksha Tyagi Kelkar and asked to recover this amount from the police officers involved in the case.

Sub-Inspector Tanaji Patil of Vanrai police station, who filed the case, confirmed that the FIR has been quashed by the high court. Speaking with Mid-day, he said,

The name of the child will also be removed from the police records soon.

Breathing a sigh of relief after seven harrowing months, mother spoke with Mid-Day narrating how the experience was so traumatising for the child as well as the family.

In one of the instances, Akansha said that Antriksh had to miss a school trip to Switzerland because of the on going case against him.

I am so happy. This [HC’s order] is the best Diwali gift ever. I am grateful to mid-day for ensuring justice to my child by highlighting our plight. Because of the FIR, we faced so many problems in the society, with many residents raising objections against us.

While the actress used her influence, the police misused their power to file an FIR against my boy. Both Assistant Commissioner of Police Sanjay Patil and SI Tanaji Patil should get the strictest punishments possible and removed from their jobs, so that they do not harass another mother and her child. Even my society members who became eyewitnesses in the case should be punished.

Akanksha alleged that ACP Patil had told her at the time that “timely apology would have avoided filing of the report.”

The juvenile judge shouted at the hearings and ordered the medical of my son to prove his age and for a maturity test, even though all proof was submitted. Moreover…my son’s name appeared on the courtroom’s walls and boards as a criminal. We suffered because of the personal grudge of the actress.

Note: If Mrs Akansha Kelkar or anyone related to Antriksh’s family is reading this, please do get in touch with us at [email protected]

Leave your comments on the story below:

▪️HC: "Facts clearly reveal it was an unintentional accident. We are shocked & surprised that police registered FIR w/o having regard to his age"https://t.co/FNzpheImoL 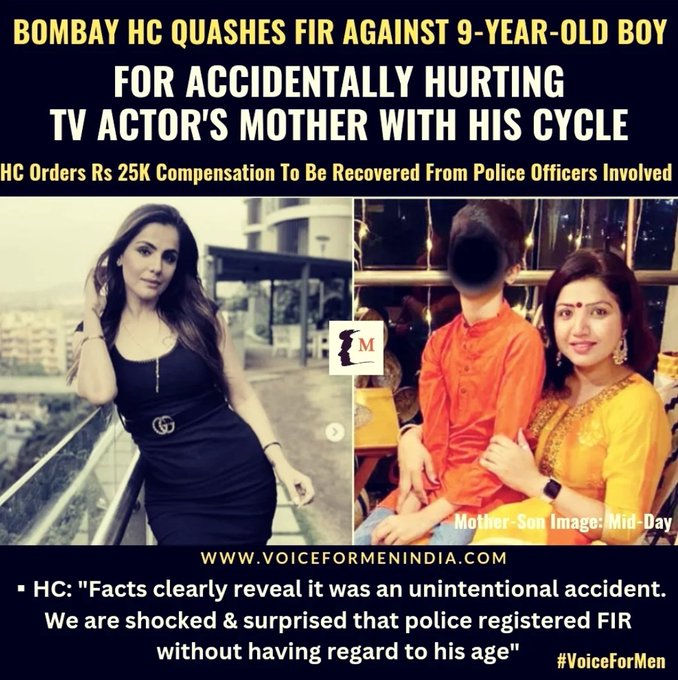 Rs 25,000
Compensation to be given to mother and child