by Team VFMI
in GENDER STORIES, HIS STORY, IN THE SOCIAL, SPEAK UP MEN
0

Several men need to thank Urvashi Rautela who is constantly demonstrating harassment and stalking by women against ‘ex-boyfriends’. While consent is must for women, it is equally important and non-negotiable for men as well.

Little Background to this Saga

Actor Urvashi Rautela and cricketer Rishabh Pant had allegedly dated briefly sometime ago. Soon, there were cryptic messages from both sides which indicated a break up.

In August this year, Urvashi referred to Pant as Mr RP in one of her interviews where she quoted,

‘RP’ waited all night to meet me during one of my shoots in Delhi. Mr RP came to the hotel lobby and wanted to meet. Ten hours passed and I fell asleep. I couldn’t attend any calls and when I woke up I saw 16-17 missed calls and I felt so bad that someone was waiting for me and I couldn’t meet them.

I told him we’ll meet when you come to Mumbai. We met in Mumbai but a huge drama happened with the paps and all.

Subsequently, Pant posted an instagram story, which he deleted within minutes. The post by the cricketer then read:

Its funny how people lie in interviews just for some meagre popularity and for hitting headlines. Sad how some people are so thirsty for fame and name. May God bless them…

Pant added hashtags such as:

She even added several hashtags, one of which read:

After bitter exchange of Social Media words, Urvashi was spotted at the Asia Cup Matches in Dubai last month. She attended all matches whenever team India was playing. The media too grabbed TRPs while panning their cameras on Rautela multiple times, including when her alleged ex-beau pant lost his wicket.

Social media has reacted sharply this time, when Rautela has posted another Insta message informing all of her flight to Australia, where the Indian cricket team will be playing T20 World Cup Matches.

On Sunday, Urvashi posted her pictures on a flight and wrote,

…followed ♥️, and it led me to Australia 🎥

Netizens have slammed Rautela, comparing her to the likes of SRK in Darr…one may also recall how another Bollywood actor Hrithik Roshan had accused Kangana Ranaut of stalking him constantly many years ago.

Rishabh Pant deserves a good advocate & a restraining order in his favour.

Rishabh Pant deserves a good advocate & a restraining order in his favour.

▪️When will Women understand the meaning of Consent? NO MEANS NO 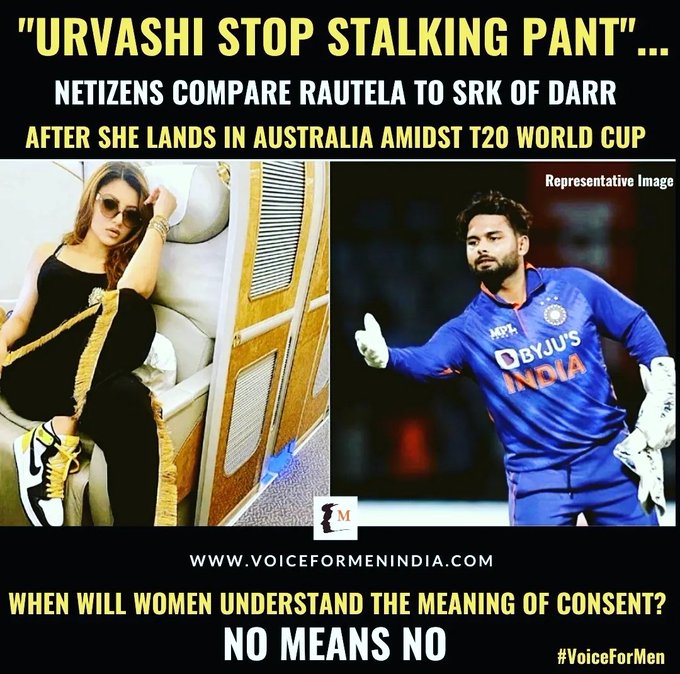 What Urvashi Rautela is doing, if any Man would have done the same thing.

We are living in a society where if Rishabh Pant does what Urvashi Rautela is doing right now , it would be called harassment. She has no self respect whatsoever.

Urvashi rautela is a psychopath. What she is doing is not funny or cute, its harassment. Chasing a committed man for attention is very creepy. Also proves women cant handle rejection either. Imagine any man doing this to smriti mandhana, whole feminist mafia will lose their sleep

Whatever urvashi rautela is doing is pure harassment, she reached to australia for stalking pant imagine if pant does this for he, he will be behind bars in no time. i seek justice for pant #ArrestUrvashiRautela