This School Killed Me, Specially Higher Authorities | 15-Year-Old Faridabad Student Ends Life After Being Allegedly Bullied Over His Sexuality

by Team VFMI
in IMPACT ON CHILDREN, IN THE NEWS, SUICIDE
0

On February 24 this year, Arvey Malhotra (15), a student of Delhi Public School, Greater Faridabad, died by suicide by jumping off his residential building in Faridabad. Later, mother of the deceased boy approached police accusing her son’s classmates of harassing him over his sexuality, which the school had allegedly ignored.

A suicide note was recovered by the police at the student’s residence, in which he blamed his ‘school and higher authorities’.

According to detailed statement then given by Sube Singh, Faridabad Police spokesperson to The Indian Express,

The boy studied at DPS and lived with his mother, a teacher. Last year, two children made lewd remarks against him. His mother complained about this to the principal but the authorities did not do anything. We have been told that after this, the student went into depression and was seeking treatment.

Because of the lockdown, the school was shut and the boy was at home. When the school reopened, the boy started going again because of exams. He felt he was being tortured (mentally). He also requested a school teacher to help him with a subject, but the teacher did not show any sympathy and accused the student and his mother of troubling her unnecessarily.

The unfortunate incident took place at around 9.15 pm after the boy’s mother had gone to visit her father. Suddenly, at 9.30 pm, she received a call from a neighbour informing her that her son had jumped off the building. She rushed to the hospital, where he was declared dead. Singh further informed The Indian Express,

The boy left a suicide note saying that his mother is a brave woman and that he took the extreme step because he was being harassed by school authorities. The DCP, ACP and Crime Branch teams went to the spot and collected evidence. An enquiry has been initiated and legal action will be taken.

The purported suicide note, addressed to his mother, stated,

This school has killed me. Specially higher authorities… tell ninna and bade papa about my sexuality and whatever happened with me. And please try to handle them… You are wonderful, strong, beautiful and amazing. Don’t care what relatives say…

Based on the complaint received from the victim’s mother, an FIR had been registered under Section 306 (abetment of suicide) of IPC against the academic head of the school, who was named in the police complaint.

The school principal in their defence told mediapersons,

I feel sad that our student left the school and this world under tragic circumstances… I want to say that Delhi Public School is a supportive and sensitive school. Kids are nurtured here and there’s no harassment here. He was a talented and artistic student and was going to appear for his exams.

We were encouraging him, supporting him and providing him with all the necessary help. Some time back, there was some subject change, scribe assistance and extra academic classes…all this matter was going on.

I know there were some personal issue in terms of treatment etc. were there. We are here to support students. The police are investigating the matter on the complaint of the family. We want an impartial enquiry so that the truth comes out and the school is vindicated.

Speaking to The Indian Express back in February, Arvey’s mother Aarti Malhotra recalled, how in March 2021, her son was sexually harassed in the school washroom by a group of schoolboys. She said that she did “complain to the authorities verbally and later in September 2021, also wrote an email”.

However, according to Aarti, she was given excuses and no action was taken by the authorities. She subsequently said,

I did not file a police complaint at the time, since I am a single mother and was scared.

BTech Student Dies By Suicide After Girlfriend, Her Friends Blackmailed Him With Intimate Pictures

In her recent post published by Humans of Bombay, Aarti opened up recalling losing her son in an untimely manner. She said,

The bullying started in 6th grade. Arvey would cry, ‘The boys call me a chakka.’ I was a teacher in the same school, DPS. I’d complain to the authorities but they’d say, ‘He’s a nautanki!’ I’d tell him things would get better.

He tried to be ‘manly’ by playing volleyball. But it wasn’t for him. He loved art & music; that made him happy. But at every step, he was mocked for being ‘feminine’.

She added stating how things got only worse by the time Arvey reached the 9th standard. The child had also confessed to his mother that he was blindfolded by boys in his class and he was made to strip. Aarti expressed,

By 9th grade, things worsened. He came home panicking & breathing heavily, read a chapter about bullying which triggered him. He confessed, ‘The boys in my class blindfolded me and made me strip. I can’t take it anymore’…

I was shocked; my son’s bullies became sexual assaulters. The school refused to take action; they failed us. It broke my heart. We visited multiple therapists. He was diagnosed with depression & lost his interest in art. In 10th grade, he got diagnosed with dyslexia, studying got difficult for him; his boards were round the corner.

I got a call from my society, ‘Come home, Arvey did something!’ I told them to take him to the hospital and when I got there, he was declared dead; he’d jumped from the 15th floor. His suicide note told me to find a new job & that I was the best mom ever. I sobbed; my entire world was taken away from me.

▪️"I did not file a police complaint at the time, since I am a single mother & was scared"https://t.co/ICVTJ4YWTG 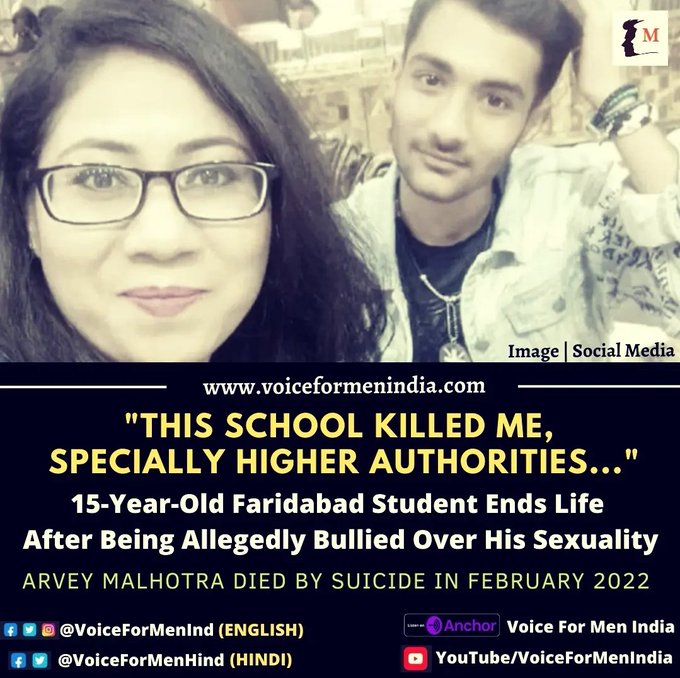