India cricketer Mohammed Shami has been amidst a bitter matrimonial battle since some years. In 2018, his wife Hasin Jahan, who is a model by profession had levelled several charges against Shami, accusing him of infidelity and domestic abuse.

Shami was slapped with non-bailable charges of domestic violence and attempt to murder. He also faced issues with his visa for overseas travel during cricket tournaments, which was sorted out with the intervention of BCCI.

Mohammed Shami’s US Visa Gets Rejected Due to Domestic Violence Case; BCCI Steps In

In 2018, as per a PTI report, Hasin Jahan claimed that the cricketer and his family tortured her whenever they went to his hometown in Uttar Pradesh. Speaking to India Today then, she said,

Yes, whenever I have gone to UP, Shami’s family also tortures me. You can ask the neighbours how they (Shami’s family) behaved with me. I was silent because he has been asking for a divorce for two years. He has been torturing me, he tried everything to make me leave him.

Shami always denied Jahan’s claims and even took to social media stating that the allegations were false and a conspiracy to defame him.

Shami had told India Today he was ready to apologise to Jahan if her allegations of infidelity and domestic abuse were proven to be true.

Back then, Jahan had filed a case of maintenance seeking Rs 10 lakh per month:

Justice Neha Sharma from the Alipore Court in Kolkata had granted Rs 80,000 per month maintenance for minor daughter Aairah Shami who remains in the custody of the mother.

Shami’s advocate had made it clear that he was willing to take care of his daughter’s well-being and expenses from day 1, however, refused to pay any maintenance towards his estranged wife, since she could always pursue her modelling and acting career once again.

Jahan is obviously not happy with the maintenance amount that Shami has been ordered to pay and is likely to appeal in the High Court.

We must remind our readers, that none of the charges levelled by the wife against Shami have been proven yet, however, the law of the land is clear when it comes to maintenance. There is no escape for a man, even before any allegation is proven against him.

During first wave of COVID lockdown, Shami in an informal chat with Cricketer Rohit Sharma, had expressed how he wanted to end his life thrice due to the false matrimonial cases he was facing. 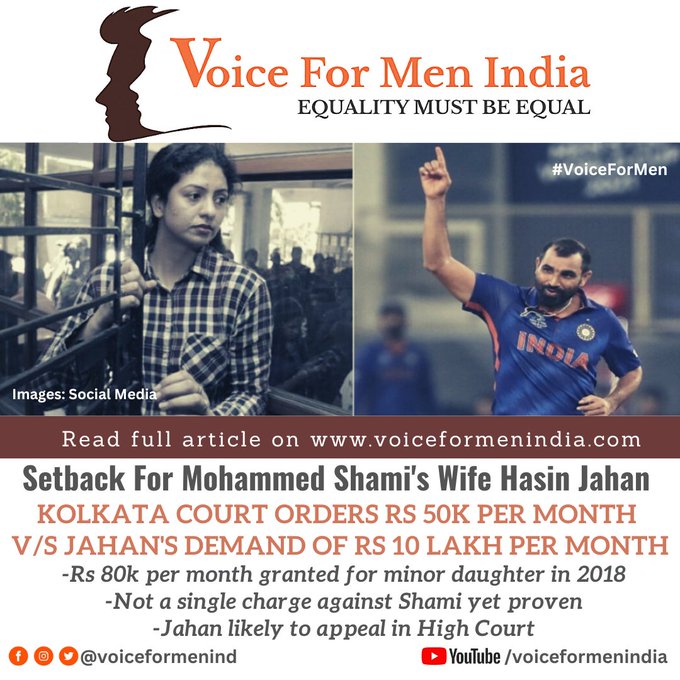