by Team VFMI
in ALIMONY, HIGH COURT, IN THE LAW, IN THE NEWS
0

Senior Citizen Husband Duty Bound To Pay Lifelong Maintenance Even If Wife Filed For Divorce Within One Month Of Marriage: Karnataka High Court (Representation Image Only)

The Karnataka High Court in its order dated January 10, 2023 rejected a plea by ‘unemployed’ husband seeking directions against wife to pay him maintenance.

A single judge bench of Justice M Nagaprasanna said that if the court directed to pay maintenance to an able bodied husband who does not suffer from any disability or infirmity, it would be promoting idleness.

Husband Must Return Stridhan If Marriage Annulled, Even If He Has Paid Permanent Alimony: Karnataka High Court

Parties got married in February 2017. Soon due to disputes between the couple, wife left her matrimonial home and started living with her parents. In 2021, husband initiates divorce petition. As a rebound, the wife instituted proceedings under Section 9 of the Act seeking restitution of conjugal rights.

The wife also filed for interim maintenance under Section 24 of the Act, seeking grant of Rs 25,000 per month and litigation expenses at Rs1,00,000 from the husband.

The petitioner/husband objected to the said application contending that he has no means to survive. Contrary to the wife’s application, husband filed another application to counter that it was him who was in need of interim maintenance from the wife, to maintain himself and his parents. The husband sought a monthly maintenance of Rs 2,00,000 and litigation expenses at Rs 30,000 from the wife, till the disposal of the petition.

The court granted maintenance of Rs 10,000 per month and litigation expenses at Rs 25,000 to the wife.

While so rejecting the application filed by the petitioner husband, the Court imposed costs upon him for filing the application seeking maintenance from the hands of the wife. Thus, the husband challenged this order in High Court.

READ ORDER | Rape Charges Can Be Quashed On Account Of Settlement Between Parties: Karnataka High Court

The primary contention of the husband was that he has become unemployed on the onset of Covid-19 and for the last two years he is not able to find a job and, therefore, no maintenance should be awarded to the wife, but in turn it should be awarded to him, from the hands of the wife.

Further, it was claimed that the parents of the wife are well off and that the wife has instituted several proceedings against the husband and his family members, thus he needs money to meet those litigation expenses.

Merely because Section 24 of (Hindu Marriage) Act is gender neutral for grant of maintenance, it would be promoting idleness notwithstanding the fact that the husband has no impediment or handicap to earn.

Remarking on state of unemployment of the husband, the Court said,

The contention that the petitioner has no job and has no means to maintain himself and, therefore, is not in a position to maintain the wife and in turn wants maintenance from the wife, is unacceptable as it is fundamentally flawed.

Merely because he has lost his job on the onset of Covid-19, it cannot be held that he is incapable of earning.

Therefore, it can be irrefutably concluded that the husband by his own conduct has decided to lead a leisurely life by seeking maintenance from the hands of the wife.

In the considered view of this Court, such an application cannot be granted, as the husband cannot afford to incapacitate himself and sustain an application under Section 24 of the Act to claim maintenance from the hands of the wife.

This would be an anathema to the spirit of Section 24 of the Act. Therefore, the husband cannot seek any maintenance unless he would demonstrate such a disability either physical or mental which incapacitates him from earning money by finding a job for himself.

The High Court reiterated that it is the duty of an able bodied husband to maintain himself, the wife and the child, if any. The Court concluded,

It is better to wear out, than rust out. 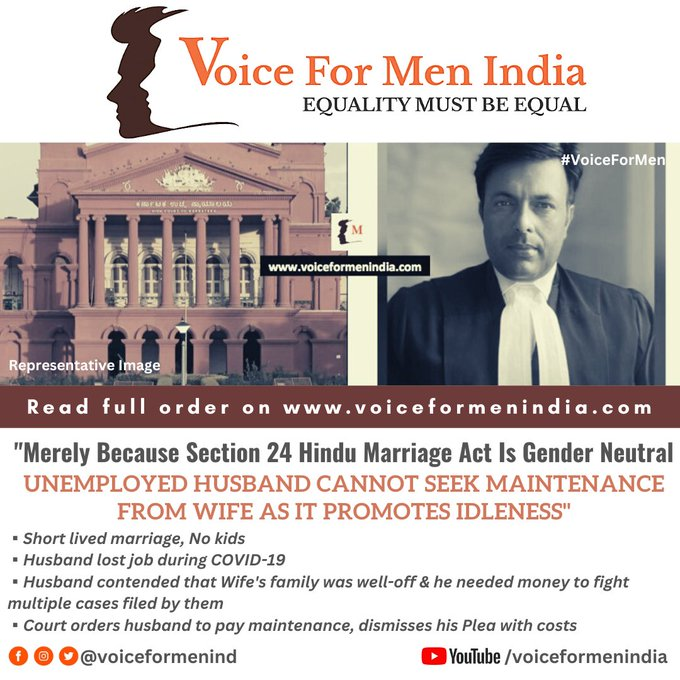