by Team VFMI
in CRIME HAS NO GENDER, HIGH COURT, IN THE LAW, IN THE NEWS, MURDER
0

The Bombay High Court in its order dated November 28, 2022 has granted bail to a woman who spent around three years in jail on charges of throwing her newborn baby from the top of the building.

Justice MS Karnik observed that the woman was upset with her husband, since he was allegedly having illicit relations with another woman.

The horrific incident had taken place in Kandivali area of Mumbai on December 5, 2019.

The applicant, who worked as housemaid, had just delivered the child at about 2.30 pm. She herself cut the umbilical cord with a knife and threw the baby from top of a building. At the relevant time, she was residing with her sister in law.

A case was registered against her with Kandivali Police Station, for the offence punishable under sections 317, 302, 201 of Indian Penal Code and subsequently she was arrested and sent to jail.

The accused woman now moved her bail application in the Bombay High Court.

The bench noted that this was “an unfortunate case.”

Granting bail, the Bombay High Court stated that the woman has been in custody for over 2 years and 11 months and the charge sheet already stands filed. The bench added,

No purpose will be served by prolonging the custody of the applicant – a woman any further. The possibility of the trial commencing any time soon in the near future is remote.

The applicant was directed to be released on bail after furnishing a PR bond of Rs 10,000 with one or more sureties of the like amount.

▪️HC: "No purpose served by prolonging custody of applicant – a woman any further. Possibility of trial commencing soon is remote"https://t.co/0ywYWivxaE 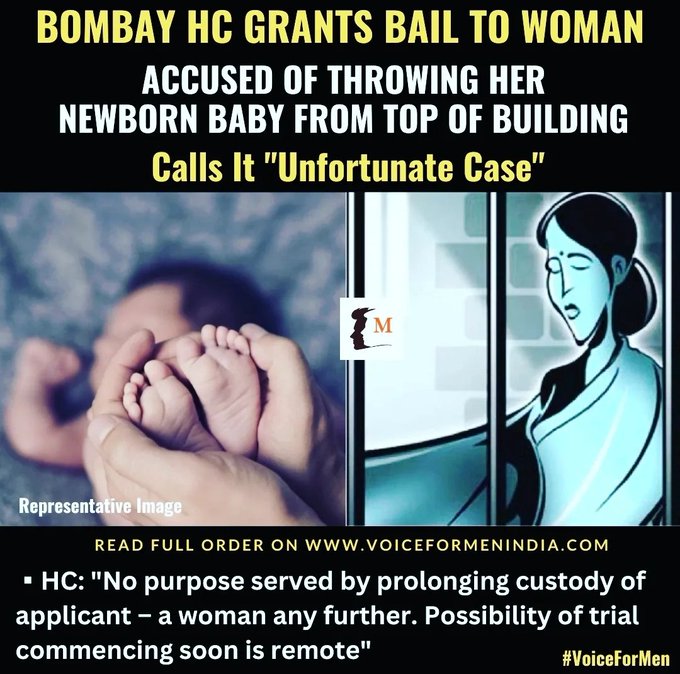