India is a patriarchal country…. because stories from other side never get reported, or even if they get reported, they rarely get trending in the elite world of social media.

Earlier this month, a woman from Rajasthan was arrested over charges of murdering her husband as she wanted to grab his insurance money. The couple had been married for nearly three decades.

Nemaram Makad (57) was married to Sharda (47) since 28-years. The couple has a son and daughter. The matter pertains to Nagaur district of Rajasthan.

The duo was having dispute over property since three years.

Three years ago, Sharda had got 15 bighas of Nemaram’s land in her name. Since then, she was plotting to kill him.

Three months ago, Sharda had insured Rs 30 lakh in her husband’s name. A pickup was also taken for the son, which was financed for Rs 20 lakh.

According to the police, on October 04, Nemaram reached home at around noon after drinking alcohol. When Sharda interrupted, there was an altercation between the two.

The matter took an ugly turn, that Nemaram beat up his wife. However, soon he fell unconscious, allowing Sharda an opportunity to murder him by strangulation.

Sharda was greedy over insurance money and also she would torture Nemaram to get hold of his property. She also reportedly broke her husband’s legs by beating him.

Police has arrested the wife after she confessed to her crime.

Family of the deceased husband accused Sharda of murdering her husband only to lay claim on Rs 50 lakh insurance amount. They also accused her of torturing Nemaram often.

INDIA DOES NOT RECOGNISE DOMESTIC VIOLENCE AGAINST MEN

NCRB DOES NOT RECORD CRIMES AGAINST MEN (BY WOMEN)

▪️Police: "Wife was greedy over insurance money & also tortured husband, broke his legs by beating him to get hold of his property"#CrimesAgainstMen#CrimeHasNoGender#VoiceForMenhttps://t.co/EHBjWltOf3 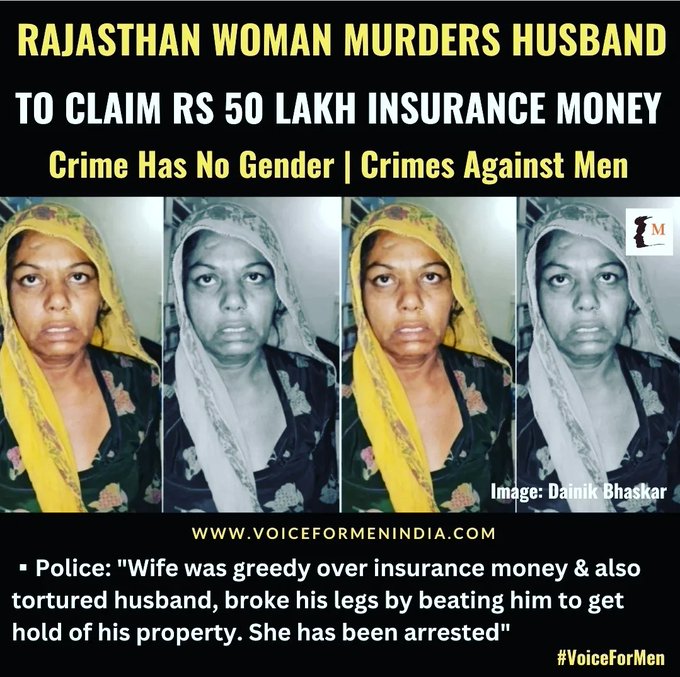