by Team VFMI
in CRIME HAS NO GENDER, DOMESTIC VIOLENCE, GENDER STORIES, IN THE NEWS
0

Rajasthan: Woman Chops Off Husband's Private Part With Blade As He Objected To Her Talking On Phone Late Night (Image: Amar Ujala)

Is India losing its plot with women empowerment? Regional media has been reporting murder of husbands by wives due to adultery, property matters or other reasons almost on a daily basis. Domestic violence against married men is a grave reality and english mainstream media repeatedly fails to debate on this topic.

A horrific incident has been reported from Rajasthan, where a woman chopped off her husband’s private parts after he objected to her speaking on phone late at night.

Chhattisgarh Woman Kills Husband, Chops Off His Genitals Due To Alleged Taunts On Her Dark Complexion | Is Society Normalising Murder Of Husbands?

The matter pertains to Barmer in Rajasthan, where the couple got married six months ago and is already having an ongoing matrimonial dispute. The wife has registered a case of dowry harassment against the husband as well.

Last week, while the husband was sleeping at night, his wife was constantly talking on the phone. When he asked her to disconnect the call, as it was disturbing him, she started quarrelling with him.

The fight took an ugly turn where the wife picked up a blade and allegedly chopped off husband’s private parts while he was sleeping.

According to the husband, he woke up screaming in pain next morning and his family rushed him to a hospital.

We are waiting for the husband’s medical report before taking any action.

Police officials added that they are probing both sides and said that further action would be taken based on the evidence.

#Rajasthan: Woman Chops Off Husband's Private Part With Blade As He Objected To Her Talking On Phone Late At Night 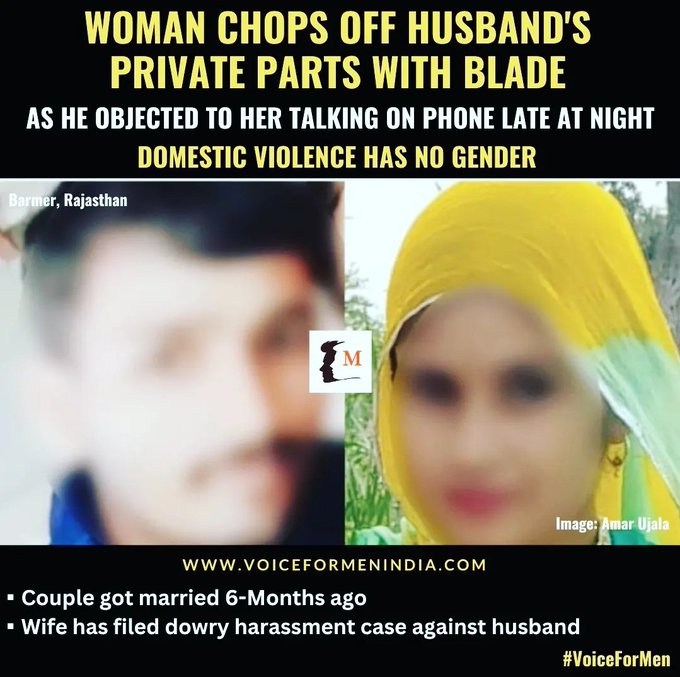