Crime Has No Gender – Its time society at large realises that all women are not victims and all men…are not monsters.

In a shocking story reported from Punjab, a man has been allegedly kidnapped, drugged and raped by four women.

The victim is a married man who hails from Jalandhar and works as a labourer in a leather factory. While he has chosen not to report the matter to the police, he shared the entire ordeal with the media.

According to the man, his kidnapping was done for sexual motive while he was on his way home on Monday.

Speaking with the media, the man said,

A white car stopped near me on the Kapurthala road and there were four women inside. The woman on the driver’s seat asked me for some address written on a slip. As soon as I started looking what was written, she sprayed some chemical in my eyes, after which I could not see anything and eventually I fainted.

When I gained consciousness, I was sitting with them in the car, blindfolded with hands tied behind my back.

The man further shared that he was taken to an unknown place where the women allegedly drugged him. He also stated that all the accused women were constantly drinking alcohol and forced him to drink as well. Adding to the incident, the victim expressed,

After this, all four women took turns to rape me. Later at around 3am, the girls left from there leaving me blindfolded and with hands tied.

The man then informed the reporters that the women, who would be in their 20s, seemed to be from good families. All were talking among themselves mostly in English. However, they talked to him in Punjabi only.

Despite such shocking details, the man has chosen not to report the matter to the police, since he is married and has kids.

According to him, his wife asked him not to file a complaint since he came back alive and that is what mattered to the family.

However, the Intelligence Department of Punjab police has initiated a suo moto probe in the matter.

▪️According to victim, his wife asked him not to file police complaint
▪️However, @PunjabPoliceInd has taken up the matter suo moto#VoiceForMenhttps://t.co/RBlDSe44Ds 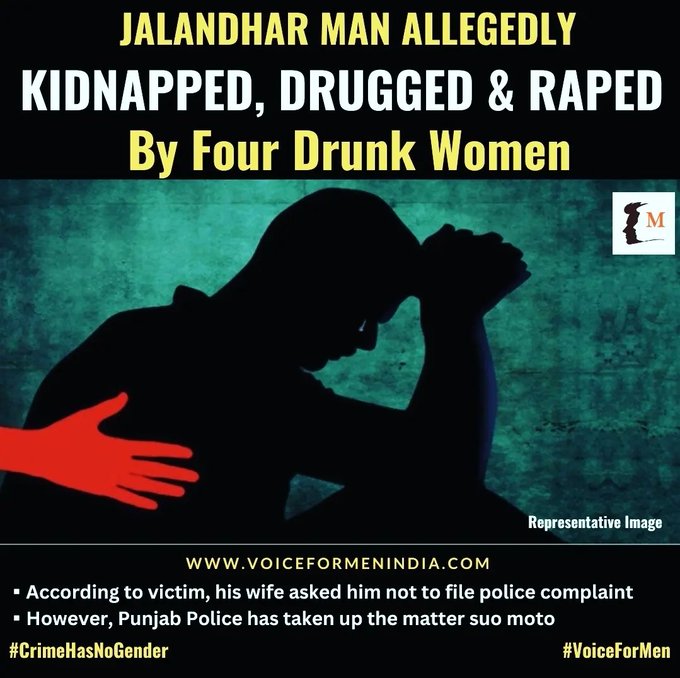