PUNE | Judge’s Father Dies By Suicide After Daughter-in-Law Did Not Allow Him To Meet Grand-Daughter; Case Registered After 4-Years

by Team VFMI
in IMPACT ON CHILDREN, IN THE NEWS, SUICIDE
0

PUNE | Judge's Father Dies By Suicide After Daughter-in-Law Did Not Allow Him To Meet Grandson; Case Registered After 4-Years (Representation Image)

In a traumatic incident reported from Pune, an elderly man died by suicide after his daughter-in-law did not permit him and his wife to meet their Grand-daughter.

What is shocking that the man – who happens to be father of a Judge – had died by suicide in 2018 after alleged cruelty by his daughter-in-law, and the case against the accused woman and her family has only been registered after four years.

Judge Sandeep Sarodia, (52) and his wife Shalini got divorced due to disputes between the two. The couple has a daughter, who was residing with her mother after divorce.

Sandeep’s father Namdev Sarodia and his wife kept longing to see their grandchild and thus, in November 2018, they visited their former daughter-in-law’s home. The elderly duo was allegedly pushed out of the home angrily by their son’s ex wife and in-laws.

Even when the Judge’s father was ill and he expressed his desire to meet his grand-daughter, Shalini and her family members did not permit access between the child and her ailing grandfather.

Namdev was extremely upset to the extent his mind got so affected, that he decided to end his life by jumping off from the fourth floor. The Judge’s father even left a suicide note.

A case has been registered at the Chaturshringi police station against Judge’s wife Shalini alias Shivani, mother-in-law Manilata Sharma, and brother-in-law Shekhar Sharma after Sandeep’s complaint post his father’s suicide.

Complaint was filed late after receiving the report of the letter and also because the mother of the complainant judge was undergoing treatment.

#Pune | Judge's Father Dies By Suicide After Daughter-in-Law Did Not Allow Him To Meet Grandson; Case Registered After 4YRS

▪️Judge's ex-wife, her family didn't permit access between grandchild & grandfather even when latter was ill#ParentalAlienationhttps://t.co/xF5yGjv1j7 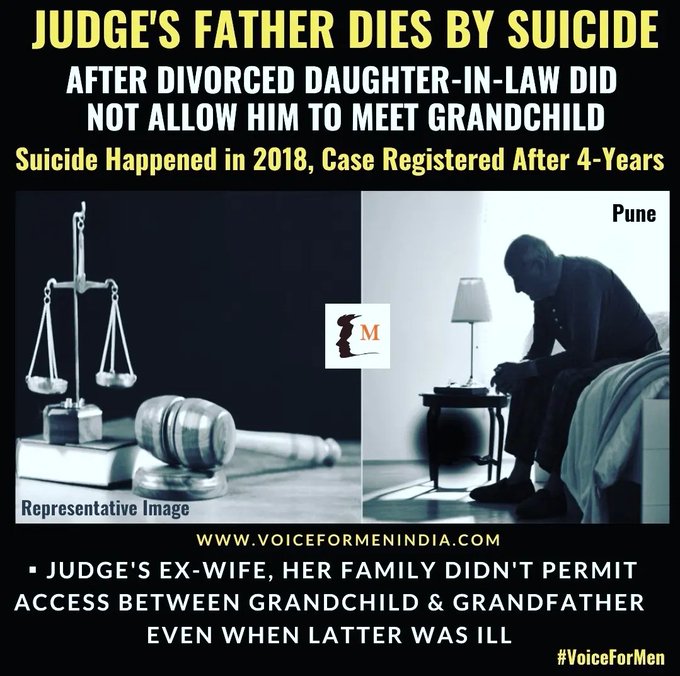