by Team VFMI
in 498A CASES, CRIME HAS NO GENDER, IN THE NEWS, NON TIER-I CITIES
0

Several women rights organisations keep crying injustice against women. How many of them raise their voice when false cases are registered by disgruntled wives, in connivance with law and order officials – to falsely frame husbands and their families?

In a recent case reported from NCR, Ghaziabad police has booked unnamed personnels at its women’s police station for allegedly conspiring with a woman to modify an FIR.

According to a report by The Indian Express, the FIR was modified with an additional charge of voluntarily causing a woman to miscarry, in a complaint referred to them by the Parivar Paramarsh Kendra, a family counselling centre set up by the government. The woman has also been booked in the case, officials said.

Based on an application at Nandgram police station, a husband and wife had been called to the Parivar Paramarsh Kendra for mediation and a date was fixed in July 2022.

The husband allegedly refused to appear until September and thus, counsellor Neha Chauhan had suggested to the wife to file an FIR against her husband who had refused to attend mediation sessions in an ongoing matrimonial case.

Subsequently, an FIR was filed at the Mahila Thana in Ghaziabad on September 15 under:

…of the Indian Penal Code

Provisions of the Dowry Prohibition Act were added as well.

The husband later obtained a copy of the recommendation letter via Right To Information (RTI), officials said.

However, on December 26, 2022, Chauhan filed an FIR at the Sihanigate police station stating that the second page of the September complaint was changed, and the charge related to miscarriage had not been revealed earlier to her at any point.

The allegation is that the second page of the complaint has been changed in some way. The matter is now being looked into by the investigating officer and action will be taken based on the findings.

Thereby, a case was filed under:

…of the Indian Penal Code.

SHOULD THERE BE STRICTEST ACTION AGAINST ANYONE WHO FILES FALSE CASE?

LEAVE YOUR COMMENTS ON THIS CASE BELOW: 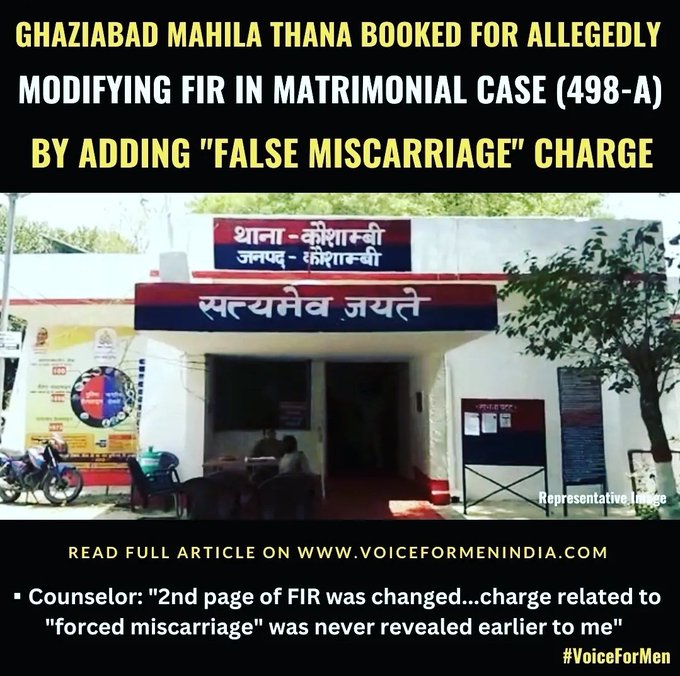