On one hand Supreme Court is hearing the Marital Rape PIL, challenging split verdict given by Delhi High Court in May 2022. However, on the other hand, the Delhi High Court has quashed a case of unnatural sex under Section 377 IPC, after both parties – husband and wife – have reached a ‘settlement‘.

In matrimonial cases, where settlement has taken place, offence under Section 377 of Indian Penal Code can be compromised and FIR can be quashed as parties have to move ahead in life.

In September 2021, the husband had approached the Delhi High Court seeking quashing of the FIR on the ground that the wife had settled all her disputes amicably with the husband and in laws and that a settlement was arrived at between the parties then.

As per the settlement agreed mutually, the husband shall pay lump sum amount of Rs. 74,00,000 to the wife as full and final settlement towards all claims, stridhan, child maintenance and permanent alimony. It was agreed that husband will pay:

Out of total Rs 74 lakh, Wife will deposit Rs 10 lakh in the name of the minor son for his benefit till he attains the age of majority.

Affidavit by Wife after Settlement

The complainant wife also filed affidavit affirming the fact that her claims and grievances against the petitioners (husband and in-laws) in the above-mentioned FIR stands settled. The affidavit also stated that the complainant does not have any objection if the FIR against the petitioners is quashed as she has already settled her claims due to her.

Justice Talwant Singh referred to a decision of a coordinate bench in Rifakat Ali & Ors v. State & Anr. decided on February 26, 2021 wherein the Court had quashed an FIR under Section 377 of IPC on the ground that the parties had compromised the matter with each other only because it arose out of a matrimonial dispute. The High Court remarked

So, the view of the co-ordinate bench is that in matrimonial cases, where settlement has taken place, even the offence under Section 377 IPC can be compromised and FIR can be quashed as parties have to move ahead in life.

I concur with the said view.

Quashing the FIR under Section 354 IPC in the matrimonial dispute after monetary settlement, the Delhi High Court said,

Keeping in view the fact that parties have settled all their disputes, hence the offence under Section 354 IPC is also allowed to be quashed to put an end to all bickerings between the parties and allow them to begin a new chapter of their lives.

While quashing the FIR, the Bench said also noted,

The respondent No.2/complainant (wife) states that she has settled all her matrimonial disputes with the petitioners out of her own free will, without pressure, coercion or undue influence and states that she does not want to pursue with the present case any further and requests that the present FIR and the proceeding emanating therefrom may be quashed. 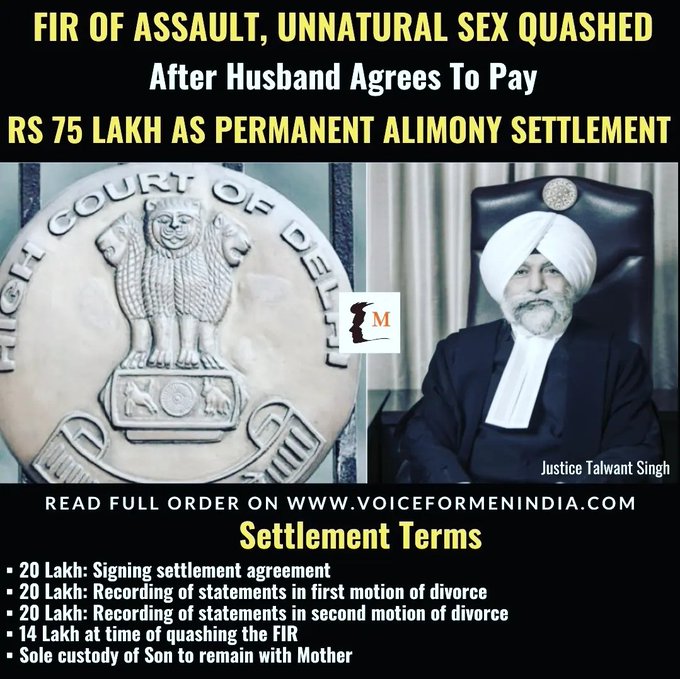