Chhattisgarh Woman Kills Husband, Chops Off His Genitals Due To Alleged Taunts On Her Dark Complexion | Is Society Normalising Murder Of Husbands?

Chhattisgarh Woman Kills Husband, Chops Off His Genitals Due To Alleged Taunts On Her Dark Complexion | Is Society Normalising Murder Of Husbands? (Representation Image)

Remember Alia Bhat starrer Darlings? We had raised our opinion against the concept of that movie, which promoted tit for tat violence by wife on her spouse. Such movies not just encourage married women to take law in their hands, but somewhere even make them believe that they haven’t done anything wrong.

A case of #HusbandMurder has been reported from Chhattisgarh where a woman allegedly axed her husband to death…due to his frequent taunts about her dark complexion.

30-year-old Sangeeta Sonwani allegedly murdered her husband Anant Sonwani, 40, in Amleshwar village of Chhattisgarh’s Durg district on Sunday night. Sangeeta had married Anant after the death of his first wife.

The accused woman confessed to her crime, attributing her anger towards ‘her husband’s frequent taunts about her dark complexion.’

The woman also allegedly chopped off the victim’s genitals.

As per preliminary investigation, the victim used to call his wife ugly and frequently taunt her about her dark skin. The couple had quarrelled on the issue several times in the past.

The couple entered into an argument on Sunday night and in a fit of rage, Sangeeta allegedly attacked her husband with the axe kept in the house and killed him on the spot.

The officer added that the accused woman initially tried to mislead the villagers soon after the man was found dead. She informed the neighbours that her husband had been killed by someone else.

However, during investigation, the accused wife admitted to have committed the offence.

The woman has been booked under section 302 (murder) and other relevant provisions of the IPC and further probe is underway.

Woman Burns Husband Alive Because She Hated His Dark Complexion

Chhattisgarh Woman Kills Husband, Chops Off His Genitals Due To 'Alleged' Taunts On Her Dark Complexion 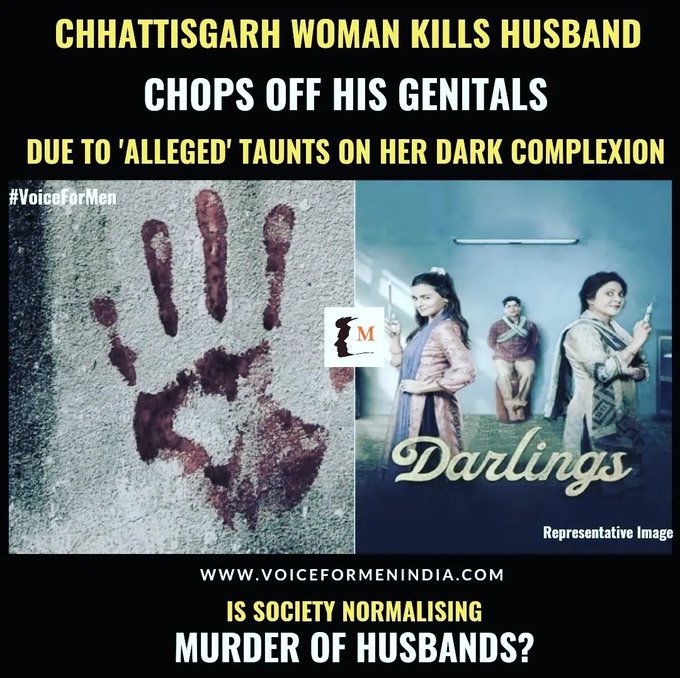