by Team VFMI
in IN THE NEWS, MURDER
0

The horrific accident of Delhi based woman Anjali Singh is still giving chills to everyone who has watched that video. In the meanwhile, yet another dreadful incident has come to light, this time from Noida.

A food delivery agent has become the latest prey to another hit and run case in the NCR, where he was dragged for nearly 500 meters after his two wheeler was hit by a car. The victim died on the spot.

Kaushal Yadav worked at Swiggy and was out for food delivery on New Year’s night on Sunday, when a car hit his two-wheeler near a flyover in Noida Sector 14.

According to some eyewitnesses, the driver of the car only stopped near a temple, which was 500 meters away from the accident spot. Shockingly, the accused drove off and fled the scene, after Kaushal’s body was thrown aside.

Kaushal’s brother Amit dialed his number at around 1am and this is when a passerby received the call and informed him about the accident.

Speaking with media, officials confirmed that a case has been filed based on a complaint filed by Amit and investigation is on. The official said,

We are scanning the CCTVs installed in the area to trace the accused.

Swiggy has expressed their solidarity with Kaushal’s family and extended financial and legal support. A spokesperson of the food delivery company said,

We are deeply saddened by the loss of our delivery partner Kaushal Yadav in a heartbreaking incident on January 2nd. We are in constant touch with his family members and doing everything in our capacity to expedite this case, including processing insurance and offering legal support to his family.

After #AnjaliSingh's Horrific Accident, Swiggy Delivery Man Dies After Getting Dragged By Car For 500 Meters

▪️While both incidents are extremely traumatic, victims like Kaushal Yadav will never make it to prime time
▪️Stop Gender Politics#VoiceForMenhttps://t.co/IATXsk11iR 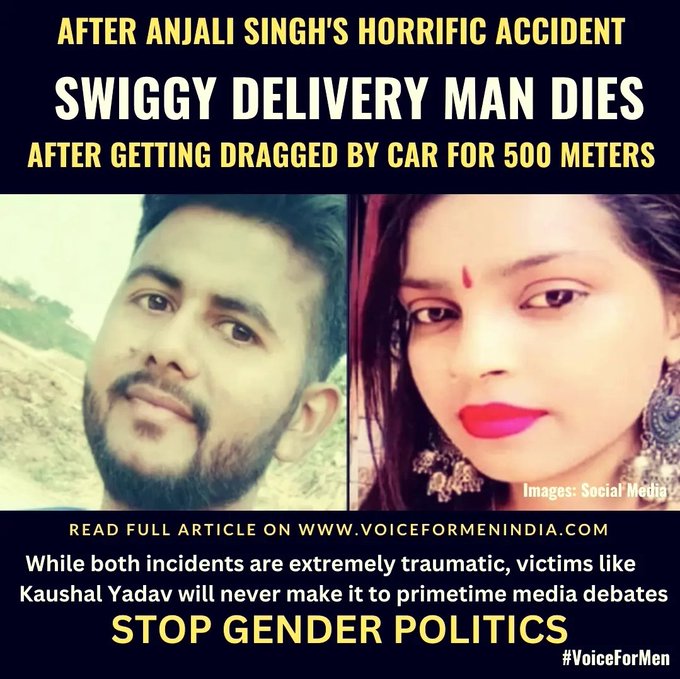